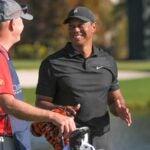 PONTE VEDRA BEACH, Fla. — On Wednesday in Northeast Florida, the PGA Tour readied its headquarters for a Hall-of-Fame ceremony. Four longstanding members of the golf community were scheduled to be inducted that evening.

But only one of those four is plotting a PGA Tour comeback.

Tiger Woods’ caddie Joe LaCava — who will be at the ceremony on Wednesday — spoke to SiriusXM PGA Tour Radio on Wednesday and explained how he sees Woods’ potential comeback.

Host Taylor Zarzour pointed out that the last time we saw Woods and LaCava in individual stroke-play competition was at the 2020 Masters, when Woods birdied five of the final six holes, including the last four.

“That’s a pretty cool last moment we’ve seen, but I know he wants more moments on the golf course in the future with you,” Zarzour said.

“Yeah, 100 percent,” LaCava agreed. “I mean, he realizes, like he’s said, and you’ve heard all the press conferences, he may not be able to play as much as he’d like to, obviously.”

Woods has made it clear that he’ll never return to playing a full PGA Tour schedule. But LaCava recognized with a laugh that to Woods, a “full-time” schedule meant something different than it did to other pros.

“He never played a lot anyways, so I jokingly say full-time and you talk about full-time, full-time for him was 11 or 12 tournaments.”

Woods fans have been eagerly awaiting news on his progress after an encouraging showing at the PNC Championship in December. LaCava was optimistic but realistic in describing his boss’ next steps.

“He takes it one day at a time, but he’s certainly hoping to get back.  He loves to do this more than anything, like all the guys,” LaCava said. “And same thing I tell people, listen, I said, ‘How many times can this guy work his butt off?’

“When I say work his butt off, not just chipping and putting in the backyard and hitting balls.  I mean, he’s gotta work his butt off every single day rehabbing and stuff like that in order to get back and be able to walk and be able to walk a golf course, then obviously try to play at that level.  So I think he’s willing to give it one more hard go on, you know, the work that he’s gotta put into it.”

LaCava saw firsthand the effort it took for Woods to stage his previous comeback from back fusion surgery, which culminated in his victory at the 2019 Masters. He knows that this time around will be even more demanding. Woods is older — he turned 46 in December — and he’s never faced a recovery from injuries like this; he suffered comminuted open fractures to both the tibia and the fibula in his right leg after a horrific wreck last February.

“I think it’s gonna be even more work than it was coming back from the fusion surgery with the back and stuff like that, but I think he’s willing, at this age, to do it.  And, like you said, maybe that father-son tournament gave him a little more motivation because, as most people saw if they watched it he hasn’t lost much in the golf. He may not be quite as long as he once was but he can still hit the ball and still can putt and chip. So, I mean, if he can get around a golf course, he could still be dangerous, if that happens.”

In other words, LaCava is saying what golf fans have learned again and again: You’d be unwise to count out Tiger Woods.

“You know Tiger, very humble and stuff like that, I know he is pumped about it as well,” LaCava said. “I realize that I’m a tail-end guy, but I also feel like I’m a part of his career, so I’m psyched that he asked me and my wife to come down and be a part of it. That’s the kind of person he is. Just the greatest player to ever play the game getting inducted tonight.”

The ceremony will air live Wednesday at 7 p.m. ET on Golf Channel.