‘This one, it’s just not as exciting:’ Brooks Koepka jabs Royal St. George’s 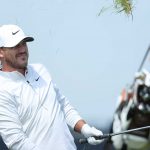 Brooks Koepka hits a shot out of the rough on Tuesday at Royal St. George's in advance of the Open Championship.

Ben Curtis, at the 2003 Open Championship, rolled in an 8-foot par putt on 18, waited to see if his final-round lead would stand and, when it did, was greeted by fans’ cheers and players’ congratulations. It was his first-ever top 10, let alone win, let alone major championship win.

A handful of yards away from it all, a 13-year-old boy slept.

“We got the opportunity — I must have been — I don’t know what I was in, fifth, sixth grade, something like that — just to come over here and play St. Andrews, Carnoustie, come watch I think the final round of the Open,” Brooks Koepka said. “Me, my mom and my little brother, we came over, I think, a couple days early from when the whole thing was going to start and just got to play links golf. I thought it was so much fun. That’s kind of when I fell in love with it.

“It’s kind of funny, I think with about three holes left, I remember Thomas [Bjorn] took a few out of the bunker, and I think Ben was maybe a group or two behind him, but I ended up falling asleep right in the little pavilion to the right of 18 and didn’t even see the finish.

“I remember getting yelled at by my mom. ‘I didn’t bring you over here to fall asleep’ kind of deal.”

Royal St. George’s was the host in 2003. It’s the host this year, with the tournament beginning Thursday. Maybe it wasn’t Ben Curtis that put Koepka to sleep.

The course in Sandwich, England, Koepka said, is “not my favorite of the rotation, put it that way.”

“Like I said, playing St. Andrews is probably my favourite place in the entire world to play,” said Koepka, who added that he played just the front nine before Tuesday’s press conference. “Portrush two years ago was — I don’t know, I love that place. I thought that was just such a good Open. A fun golf course to play. Really enjoyed that.

“This one, it’s just not as exciting. I don’t know why. Whether it be a couple shots to nothing, a couple blind — I don’t want to say — a couple blind tee shots or shots in where you can’t really see much. I’m not too big of a fan of that.”

Still, while Koepka may hate the player, he doesn’t hate the game. He “loves” links-style golf. “I think it takes a lot of creativity and imagination,” he said. “In the States a lot of times, you just throw it up high in the air and the ball is going to stop, where you’ve really got to pay attention where the ball is going to bounce into the green. You might have 50 yards, but you’ve got about six clubs you could play. I think that’s fun.”

And, put the Masters, the PGA Championship, the U.S. Open and the Open Championship on Mars, and the four-time major champion will put on a Nike space suit and, at worst, top-10.

“Yeah, it doesn’t matter,” Koepka said when asked if his opinion of Royal St. George’s will affect his outcome.

“I’ve won on golf courses that I’m not a big fan of before. It has nothing to do with it. Still got to get up and go hit the shot and do what I’m supposed to do, so that doesn’t bug me. I don’t care whether I like the place, don’t like it. You’ve still got to play good and go hit the shots.”