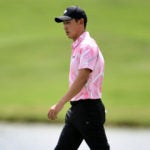 Sangmoon Bae made a par.

Bae’s second swing, and third stroke, on the hole during Thursday’s first round of the 3M Open found the water while trying to go over it on the way to the green. Drop. Penalty. He was the same 250 yards out.

He was going to hit the same shot, too.

Bae’s third swing, and fifth stroke, found the bottom of the cup. Par. From 250 to 0 in one shot. End of hole. End of round.

According to the PGA Tour’s website, it was the longest hole-out for par since 2003, when the Tour began using ShotLink tracking. The previous best was Steven Bowditch’s 176-yard miracle during the 2011 RBC Heritage. The Tour was uncertain if there had been a longer hole-out before that.

It could have been better.

He hit two other balls in the water during his round.