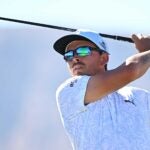 Rickie Fowler hits his tee shot on Saturday on the 11th hole at the Summit Club.

Rickie Fowler, on the par-5 18th at the Summit Club in Vegas, hit his tee shot 326 yards down the right side of the fairway, then held his driver out to his left and slightly above his hips after his follow-through and twisted his fingers. Only the club really didn’t twirl. It just kinda fell, and he picked up his peg and walked out of the tee box.

Not everything is back. This is still a work in progress.

But things are progressing. In search of his first victory in over two and a half years, Fowler birdied nine holes on Saturday, bogeyed none and enters Sunday’s final round at the CJ Cup with a two-shot lead. His 63 followed a pair of 66s.

“I’ve done everything I really wanted to do the first three days,” Fowler said. “It’s nice to be executing the way we are. I say ‘we,’ it’s a two-man show out there, Joe [caddie Joe Skovron] and myself, and ultimately I’m the one pulling the trigger.

“No, it’s just been a long time coming. I haven’t been in this position a whole lot in the last couple years, so to feel the emotions again on the back nine being around and then in the lead, you know, kind of dealing with that again and kind of making sure that I was going through the right process and committing to what I was ultimately trying to do, it was great to see that I was still executing and hitting the shots that I wanted to.”

A long time coming is right, and, by this point, you’d be excused if you thought this ‘comeback’ would stall like so many of the others before. Since Fowler’s victory at the Waste Management Open in early February of 2019, he’s not only had no wins, but just six top 10s — including just one last season, where he missed the PGA Tour’s FedEx Cup playoffs for the first time in his career. Once top 10 in the world, after five Tour victories and three international ones, he’s now 126th.

Of course, as Fowler and swing coach John Tillery have tweaked his swing, there have been teases. He tied for eighth at the PGA Championship at the end of May. He tied for 11th at the Memorial at the start of June. Last week, at the Shriners Children’s Open, his first event after failing to make the playoffs, he missed the cut, but shot a second-round 66 and said it was “the right stuff.” Both that tournament and the CJ Cup are in Vegas, which is also the home to Fowler’s former swing coach, Butch Harmon, and in a quick visit, Fowler said Harmon told him “he loved everything that Tiller and I were working on.”

Then came the 66s on Thursday and Friday. And on Saturday, wouldn’t you know it, he kept it right on going. He played his first eight holes at five under. And he played the back nine at four under, the 63 his lowest score since another 63, at the Shriners in 2018. Most notable has been his driving — for the week, Fowler is first in the field in Strokes Gained: Tee to Green; last season on Tour, he ranked 89th.

“I’m not surprised — this has been coming,” Fowler said. “Like I said, we’re not done yet. This is just three days and golf tournaments are typically 72 holes, so we’ve got 18 more of them.

“It’s definitely going to be a challenge tomorrow. It’s a tight leaderboard, and this is a golf course where you drive it well, which I’ve been doing this week, you can score. But as soon as you get a bit offline off the tee, it becomes a whole different golf course.”

Lurking Sunday will be Rory McIlroy, who is two shots back and shot a 62 on Saturday. Three others are three behind. The 54-hole lead marks Fowler’s first since his last win, and since that’s been a while, and you sometimes forget how to execute things like club twirls, he was asked how he’d sleep on it.

“Keep it fairly simple, nothing too crazy,” Fowler said. “Yeah, put our feet up and relax.”