‘There’s not sometimes a lot of thinking’: Billy Horschel jabs courses in ‘America’ 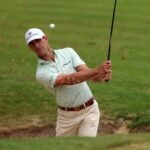 Billy Horschel hits out of the sand on Friday on the 18th hole at Wentworth Golf Club.

Billy Horschel, while playing in his first European Tour event two years ago, said he was playing a different style of golf, too.

Horschel, in an interview on Golf Channel during Friday’s second round of the BMW PGA Championship, said that Wentworth Golf Club makes you “think your way around it.” And courses back home in America?

“As I’ve said in ’19, too many times in America we’re not getting penalized for mishit shots off the tee or maybe around the green,” Horschel told interviewer Tim Barter when asked “what he particularly enjoyed about Wentworth.” “And there’s not sometimes a lot of thinking that goes into where you’re trying to position the ball off the fairway or on the green.

“So here, it’s a true old-style golf course, really good shape. It’s actually a little unfortunate we had some rain Wednesday night and a little bit yesterday because the course is really firming up and getting really fast and firm, but it’s still a beautiful test.”

Then, in a pre-tournament press conference ahead of his European Tour debut, Horschel complimented Wentworth, then compared it to its U.S. counterparts. He’d go on to shoot rounds of 72, 65, 71 and 65 and tied for fourth.

“It’s just a beautiful golf course,” Horschel said. “I think it makes you think around the course. Too many times in America, we just get up on tees, hit drivers. You don’t have to really think about where to hit it. You know, same things into greens — where you miss it on a green is really not that important a lot of weeks.

“Here, you’ve got to be smart where you put the ball in the fairway, especially going into greens — you can put it in some bad spots around the greens, you miss it and really make it hard to get up-and-down. Just a really thinking man’s golf course. A course that I love playing. These are courses I absolutely love playing. Just got a nice feel about it, built into the trees, around the trees. It’s just got a nice feel.”

On Friday, Horschel shot a 65, tied for the low round of the day, and is three shots behind leader Kiradech Aphibarnrat entering the weekend.

“As I said two years ago, I grew up watching this event on TV,” Horschel said ahead of this year’s tournament. “It was the first week we were out of school and European Tour comes on early and so I was up early watching it and absolutely loved what I saw on TV from the course to the crowds and just the history of the event.

“I’ve always wanted to get over here and I was planning on getting over earlier than 2019, but it just didn’t happen, and when I came here in 2019, it was everything it lived up to be and more. It was just a blast.”