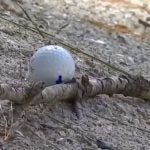 Stewart Cink played his second shot from this lie on Saturday on the 12th hole at Harbour Town Golf Links.

Stewart Cink had just followed up a 63 with another one on Friday at the RBC Heritage, and he was asked why going low one day usually precludes you from doing so the next.

“Well, I think a lot of times when you have a super low round out here on the PGA Tour, it’s because like a lot of crazy stuff happens,” Cink said. “You hole out from the fairway or maybe you hole a bunker shot or you make some long putts, but that really didn’t happen the last couple days.”

Cink, on the 416-yard, par-4 12th, hit his tee shot into the tree line left of the fairway, his ball rolled some 30 yards, then abruptly stopped. It had settled above a 2-foot-long tree stick on the upslope of a base of a tree. Cink could hit the ball and then the stick, or hit the stick and then the ball, but he’d have to hit it as is — moving the stick would move his ball and incur a penalty.

“He’s going to have to play the shot as it is,” rules official Mark Dusbabek said on the broadcast.

Cink stood above his ball and behind it and took practice swings with and without a club. He talked with his caddie and son, Reagan, about where he’d go; they eventually settled on a punch shot toward the green. After 2 minutes and 45 seconds, he’d swing.

“I think he’s going to hit stick before ball,” analyst Nick Faldo said on the broadcast.

“I think he’s got to take his club up quickly and just really attack the back of the golf ball,” analyst Dottie Pepper said.

“Somehow get to the ball first coming from that steep,” Faldo said.

Cink would punch it out — on a slow-motion look, it appeared he hit the ball first — and the ball ran up toward the right greenside bunker before settling just past it. The stick trickled down to the right.

“That came out rocking,” Pepper said on the broadcast.

“That was amazing,” Pepper said.

From there, Cink would get up and down for a par 4, narrowly missing a 40-footer from just off the green, and he’d finish with a two-under 69 and a five-shot lead over Collin Morikawa heading into Sunday’s final round.

“Yeah, that was a weird one,” Cink said after the round. “Hard to think a ball could stop there, but I’ve had plenty of shots that I missed fairways and I ended up with decent looks at the green. Golf evens out, and that’s just one of those places where I felt like I was probably getting one paid back to me.

“It was unfortunate, but sometimes you’ve just got to be really creative out there, especially a course like this.”