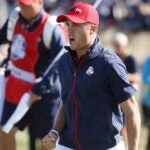 Justin Thomas is among the six players who automatically qualified for the American Ryder Cup team.

In winning the BMW Championship Sunday Patrick Cantlay got a lot more than the winner’s check and a two-shot lead entering next week’s Tour Championship. He booked his ticket to the Ryder Cup as well.

Cantlay nabbed the sixth and final automatic qualifying spot for Team USA, and will make his first Ryder Cup appearance in one month at Whistling Straits. The rest of the team will be decided in one week following the finish of the Tour Championship. When asked about it afterwards, it sounds like Cantlay had basically already been planning on joining the team eventually.

“Yeah, I’m excited,” Cantlay said. “Fred Couples texted me this week and said it looks like he’s going to be one of the assistant captains, and so he’ll be up there. I’ve been talking with Xander, obviously, and J.T. and Jordan, and we’re really looking forward to it.

“It’s nice to get in on points. I think that’s the case. And I’m really looking forward to that whole event. I’ve heard so much about it and watched it growing up. I mean, I’m sure it will be everything I’ve imagined and more. I will lock in there, and hopefully we’ll get a victory.”

Even with six captain’s picks still to be made by Steve Stricker, it sounds like plenty has already been decided for the Americans, including the fact that Couples will be on Stricker’s staff of assistants. That much had not been shared publicly yet. It also sounds like Xander Schauffele and Jordan Spieth will be two of those picks, which comes as no surprise. Schauffele and Cantlay paired well together at the Presidents Cup in 2019, and even played together in the two-man Zurich Classic event this spring.

The current, locked-in-place roster of Americans is as follows:

And on the outside looking in, at least for now: