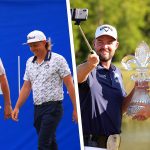 Marc Leishman and Cameron Smith had one helluva week down in New Orleans.

What was a two-man team event turned into an international match play battle between South Africa and Australia at the Zurich Classic this weekend. And 72 holes of differing daily formats wasn’t enough.

Marc Leishman and Cameron Smith survived a nervy alternate-shot playoff against Louis Oosthuizen and Charl Schwartzel to win it for Australia (and for Team Mullet as they called it), but nothing about it came easy. Their 7-foot par putt on the par-5 dropped for the win, but was only made comfortable when Oosthuizen’s putt for bogey slid by. (Oosty had pumped his first tee shot into the water hazard off the tee.)

The winning tally was a Sunday 70 and 20 under for the week, with one extra-curricular par for Team Mullet. For Smith, it was his second time winning the team event in New Orleans, and it now comes with the question “Will the mullet be here to stay? Or be gone for good?” The 27-year-old promised his girlfriend that his infamous cut will finally go if he were to win this week. When prompted with the thought afterward, he had to apologize. Not to the fans who love it, but rather to his girlfriend.

Leishman doesn’t want it to go away either. “He’s got a cult following now,” he said. “You should hear the fans out there. They’re all over him. It’s awesome.”

The Aussies rode that hype to the lead mid-day Sunday, reaching 22 under and two clear of the field with just six holes to play before leaking oil to finish. They made bogeys on 13 and 15 to lose their lead before Smith dumped his tee shot into the hazard on the drivable par-4 16th.

“He hit a really good shot,” Leishman said. “It sounds silly because it went in the water, but he hit the right club. It was the right shot. It just drifted a little bit on the wind.”

It bounded into the water, but left Leishman with a makable chip from the upslope that, in perfect match play form, dropped for a birdie. Of course.

Meanwhile, the South African squad gutted out a par and the event was in full-on match play mode from there. Both teams made bogeys at the par-3 17th and then failed to make birdies on the gettable par-5 18th. It wasn’t until Oosthuizen’s poor tee shot in the playoff that either appeared to have a distinct advantage.

For Leishman, it was his 6th-career Tour win, and a ringing endorsement for what he believes should be a stout pair on the International Presidents Cup team for 2022. “We’ve given Trevor [Immelman] something to think about, anyway,” Leishman said. While they were separated during the 2019 event in their homeland, it’s going to be difficult to keep Team Mullet from teeing it together when the event returns next fall at Quail Hollow.