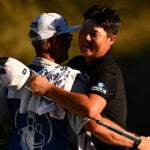 But on the golf course, threes typically get the job done. Sungjae Im made a whole bundle of ’em on Sunday at TPC Summerlin en route to a rout at the Shriners Childrens Open.

Im began his final round in a share of sixth place. He cut into the lead with a birdie 3 at the first. He parred 2 and 3 and then really got going, reeling off eight birdies in his next 10 holes to break away from a crowded field. He made nine threes in his first 12 holes. He was nine under par through 13 holes. And then he coasted to the house with five par for a final-round 62 and a four-shot win in the desert.

Im continues to be younger — and better — than you think. He plays so well and so often that we’re used to his name on just about every leaderboard, but Im is just 22 and he’s now a two-time PGA Tour winner.

His first victory came at the 2020 Honda Classic, his 50th start on Tour. His second victory came Sunday in start No. 100.

“It was very tough to get my first win, but I felt like the second one was harder and harder,” Im said immediately afterwards. “But I kept my patience. I tried to stay composed throughout the period and I’m glad it came.”

Midway through the round, the Shriners looked like anybody’s tournament. Hayden Buckley shot 63, posted 17 under and owned the early clubhouse lead. He finished T6. Adam Schenk began the day in the lead at 18 under. Rory Sabbatini shot 28 on the front nine. Marc Leishman birdied eight of his first 14 holes. That trio finished T3. And Matthew Wolff held a share of the lead early on. He wound up solo second.

But Im was the man to beat — and he wouldn’t be beaten.

“I mean, it was impressive and it was fun to watch,” said Chad Ramey, Im’s playing partner. “He deserves it, that’s for sure. He hit it well and his putter got hot. It seemed like if he wasn’t making pitches it looked like they were going in.”

For Im, the win serves as a reminder of how much has changed since his last one. At the time of the 2020 Honda Classic, Im played so often he didn’t even have a home base — he just lived hotel to hotel, week to week. Now he has a new caddie, a new trainer, a new place of residence and a new trophy to store there.

“My caddie Billy, we started a couple weeks prior to the Olympic Games and he’s been a very good help to me, we’ve been a very good team working together, communicating,” Im said. “My trainer Andrew, we started at Phoenix, but as I got to my second and third year on Tour I felt the importance of conditioning and keeping myself stronger and healthy, so we’ve been working really hard and I’m glad it all turned out well.

“Buying a house in Atlanta, obviously hotel-to-hotel was not easy, but having somewhere to settle down, to have my house and Atlanta, it’s great to commute, it’s a huge airport, there are a lot of flights to everywhere, so it all came together very well.”

It’s fitting in some ways for Im to think of logistics in the immediate aftermath of his victory. He is, after all, golf’s modern Ironman. In the 2020-21 season, he played 35 events. Nobody played more. He’s showing no signs of slowing down. On the course, things looked similarly ho-hum, even as he fired at flagstick after flagstick.

“To be honest with you, I didn’t even know that I birdied five holes in a row,” he said. That’s what you say when you’re in the zone. Im admitted that zone has been difficult to find the last year, when he has posted dozens of solid results but hasn’t gotten across the finish line.

“Obviously when I’m playing well I feel great, but when I have a bad round I feel down easily,” he said. “I think I’ve done that the last 10, 12 months. But it’s a repetition every week and I learn from each week, and from that experience, I’m learning to control my emotions and everything on the course to stay composed, and I think this week it all paid off.”

As for celebration? Im said he’ll take tomorrow to soak in the win — and then he’ll be right back at it, preparing for the CJ Cup.

Just don’t expect to see him out at the tables tonight.

“I’ll have to swing by to see what it’s like, but I have no plans to go to a casino,” he said.

There would be no way to top his on-course win, even if he did.