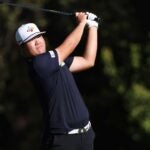 Sungjae Im has one of the slowest backswings on Tour.

If you’ve been watching the Masters this week, you’ve likely seen a shot or two struck by Sungaje Im. The 22-year-old is extremely talented and has used that ability to play himself into contention at Augusta National. There are many parts of this game that you can learn from, but his deliberate takeaway holds the most wisdom.

Im’s takeaway is one of the slowest on the PGA Tour. In stark contrast to some players on Tour, Im takes the club to the top of the swing in a languid manner that is rarely seen. But once at the top, he unleashes a powerful lash. The swing might look odd to some, but it’s the secret to Im’s success. The Korean sensation said he used to swing in a more conventional manner, but after experiencing some ball-striking woes about four years ago, he began using the deliberate takeaway in practice. He liked the results so much, he took the swing to the course. Now, he’s one of the most talented ball strikers on Tour.

“It really helped. I felt like I could hit the ball where I wanted to,” Im told PGA Tour.com. “Now I feel like my backswing is getting slower and slower.”

Another benefit to the slow takeaway is it encourages proper tempo in the swing. Yes, distance is a good thing, but if you can’t find the center of the clubface, that distance won’t matter. With a slower takeaway, you will be consciously thinking about tempo and be able to hit the ball more solidly.

Balance and connectivity of the swing will also be factors of improvement when you slow down. It encourages you to get everything in sync and will allow you to feel more confident that the clubface is doing exactly what you want it to do.

As a fellow golfer with a deliberate takeaway, I can attest to the efficacy of the slow swing. It might feel unnatural at first, but once you start finding fairways with ease, you’ll never go back.