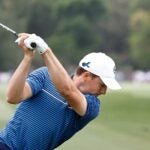 Harold Varner III is opinionated, and Saturday, he opined.

Here’s HV3 on his newborn son, Harold IV: “I’m going to play with my kid. He goes to sleep at like 8:30. It’s unbelievable. It’s like an old man. Come into the world going to sleep all the time, go out of the world sleeping all the time.”

Here’s HV3 on Patrick Cantlay: “The most impressive thing with Patrick is when you ask him a question in the media, it is so thought out. I’m just like, yeah, you know, I’m cool, man, I’m trying to go home, let me answer this question, whatever. But he is so well spoken. Obviously he’s a smart kid, but you know, to be able to articulate, especially when he doesn’t agree with someone — I know what I say when I don’t agree with someone: It’s just two words.”

Varner had joined the CBS broadcast of the RBC Heritage third round, where he shot an eight-under 63 to enter Sunday’s final round with a one-stroke lead, and announcers Colt Knost and Amanda Renner teed him up for takes. And perhaps his hottest?

Here’s HV3 on Jordan Spieth’s pre-shot routine as they watched him ahead of a stroke:

“What do you think of that little rehearsal right there?” Knost asked Varner.

There was laughter, then Varner continued.

“I mean, I thought he was about to hit it actually. We’ve had some great things in the group text about that rehearsal, but, uh, none I’d rather comment on here. But if you’re hitting shots like that I’d rehearse it.”

If you haven’t seen Spieth’s move, it goes something like this: He takes the club back, pauses slightly about halfway into the backswing, slowly takes the club back farther, then slides his hands forward and returns the club to address. It helps him get his swing into position.

Of course, there are other ways to frame it. No, Varner’s group text is not alone in making sense of it all.

“Well, basically, he feels like he has a tendency that the club gets stuck behind him and he comes in to underneath,” analyst Gary Koch said two weeks ago on Golf Channel’s broadcast of the Texas Open. “So he’s trying to get the club pointed left at the top of his swing and then get the club out in front of him to where he can get the club moving to the left going through and produce that little fade.”

“It’s hard to explain that move, other than by saying that it’s allowed him to dig his way out of a slump, to become roughly half the player he used to be,” Golf Channel analyst Brandel Chamblee recently wrote on Twitter. “If you want to thwart or hobble a genius athlete all one needs to do is getting them thinking about their action.”

On Saturday, Varner eventually left the broadcast. On Sunday, he played for his PGA Tour title.

“I’m still thinking about group texting,” analyst Nick Faldo said on the broadcast. “It wasn’t quite like that in my day.”