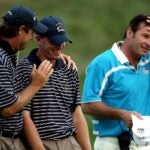 On paper, the Ryder Cup is contested between two teams of a dozen players each, but anyone who’s attended the event can tell you that math doesn’t quite add up.

You see, every Ryder Cup is ACTUALLY contested between the visiting team, which has a dozen competitors, and the home team, which has 13. “The Thirteenth Man” — the advantage provided by home-field at the Ryder Cup — is very real. One needn’t look any further than the European team in Paris in 2018 as confirmation. And this year, at Whistling Straits in Wisconsin, the Americans hope to return the favor.

The forty-five thousand or so in Sheboygan next week are sure to be raucous. You know that, U.S. captain Steve Stricker knows that, and surely the rest of the American side knows it as well. They know it so well, Stricker has reportedly eliminated the pre-round “hype videos” that were popular in previous years — the chorus of American faithful should prove plenty successful in generating the requisite hype. But still, nobody said the crowd had to be the U.S.’s only home-field advantage.

In fact, Stricker has gone to great lengths to boost the U.S.’s Ryder Cup math without the help of the American faithful. He reportedly sent out a questionnaire to prospective captain’s selections asking them to assess their strengths, weaknesses and competitive spirit. As the home captain in charge of course setup, he had a series of subtle changes made to the golf course with the goal of benefitting the American side. Once the team was selected, he hosted the team at Whistling Straits for a Ryder Cup “training camp,” giving each player a chance to familiarize himself with the landscape.

On their own, none of Stricker’s movements have been earth-shattering, but together, they paint a picture of the kind of team he’s hoping to build — a group that’s not only comfortable, but overwhelmingly prepared to defend its home turf.

“He’s just going to sell the message of preparation really hard and try to get his guys to have an advantage on that course,” said former Ryder Cup captain and current NBC analyst Paul Azinger. “Every captain is going to create an environment for these guys to be successful the best they know how.”

For Stricker, a lifelong Wisconsinite, the tournament venue sitting in his backyard has been a godsend — allowing him to investigate and understand some of the course’s strategic advantages long before either team (or a single fan) steps foot on property.

“I think Stricker does have things he can do,” Azinger said. “He’s just got to set up the course, I feel like in some ways never to disadvantage your guy, if you can. If you can find an advantage, go for it. Yeah, I think [he] can probably figure out with the makeup of his team how to mow that place.”

The American captain certainly has his hands full as far as roster management is concerned, but with six days still left until fans arrive for the first time next Saturday, there’s no question he’s done his best to stack the deck in his favor. As for whether that’ll inspire a similar mathematical advantage on the scoreboard … only time will tell.

“I just feel like Stricker has just got to make sure our guys know the course the best,” Azinger said. “That’s really — in the end, that’s it in a nutshell.”