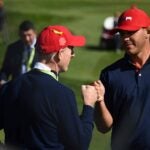 When the earpieces go in, the gloves come off.

Like others who have held the high-profile role, you’ve poured your heart into the preparation. You’ve parsed the stats. You’ve studied personalities. You’ve rounded out your roster and mapped out likely pairings. Now it’s go-time. Balls in the air.

With the competition underway, what’s left for you, the Ryder Cup captain, to do? Paul Azinger has been in this position, having shepherded Team USA to victory at Valhalla in 2008.

Based on his own experiences, and his knowledge of what others have gone through in the hot seat, we asked Azinger to describe the duties of a Ryder Cup captain after the planning ends and play begins.

Here are 8 responsibilities that stand out to him.

“For starters, just sit back and watch,” Azinger says. Sounds simple, but there’s more to it than meets the eye. You’re not just tracking shots. You’re looking out for body language, signs of comfort or discomfort. “All the while you’re thinking about your next pairings based on how everything is shaping up.”

In 2008, Azinger says, “I bet I didn’t say more than three or four things to the players on the course.” But he made those conversations count, based on his understanding of what made each player tick. Take the case of Boo Weekley. On his way to the first tee of his Sunday singles match, Weekley confided in his captain: “I’m feeling a little nervous, Mr. Zing.” Good, Azinger replied, you should be, before adding: “These are your people watching you. They’re pulling for you. Now go out there and show off for them.” Weekley grinned and nodded. Then went out and shot a front-nine 29.

As a general rule, it’s not the captain’s job to meddle with mechanics. But it can fall upon him to convey key information. In 2008, for example, JB Holmes was fighting a push-slice in his opening team match, which the Americans were losing. So, Azinger pinged Matt Killen, Holmes’ swing coach, who was familiar with the issue and had the fix. “Tell him he needs to start coming down more from the inside,” Killen said. Moments later, Azinger caught up to Holmes in a cart and passed along the swing tip. Sure enough, Holmes started striping it, and his team came back to tie the match.

With two powerhouse teams going head-to-head, the biggest difference-maker is often course knowledge. Not just experience with the venue, but an understanding of how it’s playing in the moment. How firm are the fairways? Are the greens holding? What about the wind? Anything you can’t feel from the tee? In concert with his assistants, the captain keeps close watch on all those factors, and shares the information with his players in real time. “It might be something as simple as, ‘Don’t let anyone hit driver on this hole,’” Azinger says. “It’s basic coaching, but you can’t overlook it. You don’t want to make any dumb mistakes.”

At the end of every day of competition, Azinger says, the tables in the team room are piled high with souvenirs. Flags. Towels. Photos. Name the item, it’s awaiting your John Hancock. You’re autographing them not only for the players on your team, but for volunteers, agents, tournament organizers. And on. “You’re probably signing your name 8,000 times, maybe more. You do the math. It’s a big number,” Azinger says. “Whatever it is, you know your arm is going to be sore.”

In 2008, Azinger brought in the famed football coach Lou Holtz to deliver a brief motivational speech. Otherwise, he didn’t deal in a lot of rah-rah stuff. He knew that his players possessed world-beating talent. His job was to cultivate a climate that allowed them to perform. Foosball and ping-pong in the team room? Sure. Also relaxed dinners with the players’ favorite foods. “You’re basically trying to keep distractions to a minimum and keep things as comfortable as possible during a week that can be anything but.”

Post-match press conferences. Mid-match interviews. These and other media obligations are par for the course, and captains accept them as part of the job. Their bigger concern is protecting their players from foot-in-mouth snafus. “The media can be tough, especially on the American players,” Azinger says. “You want to make sure your players aren’t caught off guard.” In 2008, he prepped his team with a list of questions that they were sure to face throughout the competition. He knew, for instance, that the absence of Tiger Woods would be a hot topic, and he wanted his players to be ready with an answer. “This year, you know it’s going to be Brooks and Bryson,” Azinger says. “Every player needs to be prepared to answer questions about that.”

Once play gets underway, “you’re pretty much at the mercy of your players,” Azinger says. Accepting that fact might be the captain’s toughest task. “Just that anticipation and uncertainty of not knowing whether you’re going to win or lose, and the limited amount of control you have.”