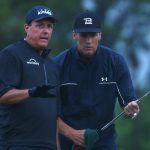 Tom Brady was among the sports celebrities to publicly celebrate Phil Mickelson's victory at the PGA Championship.

There are many ways to distinguish Phil Mickelson’s record-breaking PGA Championship victory from the remainder of the other significant moments in golf over the last decade.

The first, and most obvious, was visible for the world to see Sunday: the crowds. The scene at the Ocean Course at Kiawah Island Sunday was ripe for history, with thousands of adoring admirers lining the ropes (and bringing the noise) for the final round of play. The image of Mickelson’s 18th hole jaunt with thousands of fans behind him is comparable perhaps only to Tiger Woods’ 2018 victory at East Lake, in which the swathes of fans swarmed him on the way up the 72nd hole.

Another distinguishing factor in Mickelson’s victory is its historical significance. No player in the history of the sport has won a major championship later than Phil, who at age 50 is the oldest major champion ever. Lefty joins only a handful of players with six major championships, and the major exemption that joins his victory means he’ll have what it takes to keep chasing the career grand slam at the U.S. Open for years to come.

But in truth, the most significant way in which Phil’s win set itself apart from championships of years past was in the reaction it earned from the sports world at large. Dozens of Tour pros, golf legends and sports celebrities celebrated as Phil walked off the 18th green — some close enough to Mickelson to share a hug and a warm word, others on social media. The best of the bunch are listed below.