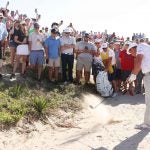 You will find a lot of sand at Kiawah, but technically no bunkers this week.

Kiawah Island is about as sandy as a major championship can get. It’s located on the coast of the Atlantic Ocean in the “low country,” where tall grass blends with sand just about everywhere.

But that doesn’t mean there are a lot of bunkers on the Ocean Course. In fact, this week at least, there are ZERO bunkers. None. Not a bunker in sight!

The PGA of America has instituted a local rule for this week’s PGA Championship that calls all the sandy areas around the course exactly that: sandy areas. They are not bunkers, even the ones that look a lot like bunkers, and so they don’t need to be treated like bunkers.

Kerry Haigh, the chief championships officer for the PGA of America, put it bluntly in his press conference earlier this week: “As we have in previous championships, the sandy areas will not be bunkers, and we’ve notified all the players of that. So players will be able to take practice swings out of the sand areas. It’s part of the general area.”

Dustin Johnson would like a word! (Johnson infamously lost the 2010 PGA Championship after grounding his club in a bunker on the 18th hole at the waste-area-heavy Whistling Straits.)

Hopefully your TV viewing will be simplified as a result. When any player takes a practice swing and catches some sand from one of those areas, don’t call in to the PGA Championship with a complaint. It’s not a penalty.

The official text, as released by the PGA this week, goes as follows:

Bunkers: There are NO bunkers on the course. All sandy areas, whether natural, specially prepared and/or enclosed by grass and are not in a penalty area are treated as part of the general area. These areas are not considered to be cut to fairway height or less and relief for an embedded ball under Rule 16.3b is not allowed in these areas.

With fans on the course, it’s easy to understand how footprints can affect a lie in sandy areas. (This was Johnson’s original concern back in 2010, as his lie was in an area where many spectators had been standing.) The PGA of America has a reasonable cure for that.

All sandy areas INSIDE the gallery ropes will be raked each morning. So keep it inside the ropes and the only steps you’ll have to worry about are those of players and caddies (and anyone with inside the ropes access). Players and caddies who wish to rake these areas out of courtesy for those who follow them are allowed to do so at their own discretion, though raking is not mandatory.

That being said, there will be no relief from these sandy areas without penalty. Rory McIlroy asked for relief while making a mess of the par-5 16th hole when his ball appeared to embed in the sand. Unfortunately for him, there was no relief to be had. Tough break, Rors! As always, don’t hit it there.