Shriners Hospitals for Children Open: 3 things to know after Round 3 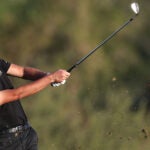 Patrick Cantlay hits his second shot on the 18th hole at TPC Summerlin on Saturday.

One player descended. Another ascended. One of the second-round leaders remained in the lead after the third. He’s been at or near the top of the leaderboard for the past three years, too. Money comes and goes in Vegas. But he’s just money. Here are three things you need to know after the third round of the Shriners Hospitals for Children Open at TPC Summerlin.

Cantlay shot a bogey-free, 6-under 66 for a 20-under total and a share of a two-stroke lead with Martin Laird, who, along with Cantlay, was one of five players to lead after the second round. Matthew Wolff, Wyndham Clark, Brian Harman and Austin Cook were tied for third.

“Everything was solid today,” Cantlay said. “Drove the ball really well, wedged it well and actually didn’t have all my putts go in. I hit a lot of good putts that didn’t go in. All in all, it was a real solid day and in a good spot for tomorrow.”

Wolff made a big leap.

He played his first eight holes at 1-under. He played the final 10 at 8-under – and nearly 10-under. He started the day tied for 40th. He ended it tied for third.

“I think this course just you have so many birdie opportunities if you hit the ball in the fairway,” Wolff said. “It’s not long. The pins were in pretty favorable spots. I just told myself to give myself as many looks as I can, and the putts would fall. Even though it seems like some of them didn’t, I hit the ball really well.”

Kevin Na, last year’s champ, and Will Zalatoris were three shots back, and five players were four shots back.

Bryson DeChambeau made a big fall.

DeChambeau double-bogeyed the 2nd. He played holes 4, 5 and 6 at 4-over. He then played his final 11 holes at 5-under for an even-par 71. Only seven players were worse on Saturday.

He started the day in second and ended it tied for 31st.

“Yeah, it was really weird,” DeChambeau said. “I don’t know. It’s golf, right? I mean, you’re never going to play your best all the time, right? So I just felt like couple things got off a little bit. Didn’t really hit bad shots. Just didn’t go where I wanted to.

“Went into some really bad places unfortunately and didn’t save par from them. Just stuff didn’t go my way today, and it’s OK. Not a big deal.”