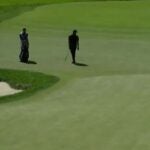 Patrick Cantlay watched in disbelief as hit shot hit the flagstick and wound up 25 yards in the wrong direction.

Is it possible to hit a golf shot too accurately? Just ask Tiger Woods … and now Patrick Cantlay.

With swirling winds and punishing conditions in Mamaroneck hammering his score to the tune of six bogeys, Cantlay found himself in attack mode just off the front of the 15th green. He faced a short pitch shot from the fairway on the long par 4, and a back right pin position beckoning for the 28-year-old to take aim and earn a stroke back from the field.

He surveyed the green, a spine intersecting its false front from the hole location in the back. So long as he hit a half-decent chip, the worst he could do was make par.

The former U.S. Open low amateur watched in horror as his ball banked off the center of the flagstick and directly back in his direction. He could process little more than an upward-facing palm as he watched the ball race back over the spine of the green, down the false front and directly past he and his caddie, Matthew Minister.

As a general rule, it’s never a good thing when a player hits a shot that winds up further away from the hole than it began. For Cantlay, the punishment was particularly cruel. He hit his initial pitch 22 yards from the hole and lined up for his second 47 yards from the hole — the ball traveling some 25 yards in the wrong direction.

Check it out for yourself below.

Cantlay would go on to make bogey on the 15th, finishing the day with a six-over 76 and moving to second-to-last in the field when he finished at 12 over.

If there’s a silver lining to take from that three-decker sauerkraut and toadstool sandwich of a chip shot, it’s likely that Cantlay will be far from the last player to face a brutal break coming down the back nine at Winged Foot this weekend. The average third-round score through the early pairings Saturday is 76.