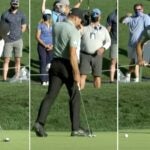 Sergio Garcia has played plenty of excellent golf this week at TPC Sawgrass, but his unlikely miss on a short putt on Friday might haunt him.

Sergio Garcia has played quite well in this week’s Players Championship. He held the 18-hole lead after a dazzling opening-round 65, and even in Round 2 when he hasn’t had his best stuff, he’s kept himself in contention. But all of those good vibes from the week were dashed a bit after Garcia missed a near tap-in on the 15th hole on Friday.

Coming off a three-putt bogey on the 14th hole, Garcia’s stroke was a bit timid on the 15th green as well. After knocking his approach shot to 23 feet from the hole, his birdie putt wasn’t as on line as he might’ve liked. The putt settled within 23 inches of the hole and Garcia looked like he was on his way to a stress-free par.

As Garcia approached the ball, he appeared indecisive on whether or not he would mark his ball. He reached into his pocket for the marker, but then second-guessed himself and decided to clean up instead.

The ball never touched the hole.

Garcia’s stroke was a bit timid yet again as the ball raced past the cup and rolled out four feet beyond the hole. He followed the ball in disbelief, gathered his emotions, and then tapped in for an unfortunate bogey.

The good news for Garcia is he put the misfire behind him quite quick. He birdied the following par-5 16th, escaped the daunting island-green 17th with a par, and followed it with a clutch birdie at the finishing hole to close out the round.

The Spaniard signed for an even-par 72 on the day, but he will go to bed tonight knowing it should have been one better.