‘It doesn’t add up’: Players question green conditions after water balls at 17 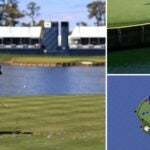 Thursday brought mayhem to No. 17 at TPC Sawgrass.

If you’ve spent much time around the game of golf, you know about double bogeys. You’ve made triple bogeys. Quadruple bogeys, too.

But if you were watching the best golfers in the world take on a tantalizing back pin on the 17th green at TPC Sawgrass on Thursday afternoon, you had a chance to expand your golf vocabulary.

Last year, on the only day of the Players-that-wasn’t, only three golfers found the water at No. 17. This year, the 12:16 p.m. tee time matched that feat in roughly two minutes, when Anirban Lahiri, Robby Shelton and K.H. Lee dunked their tee shots one after the next.

Midway through Thursday afternoon’s round, 13 players had made double bogey at No. 17. We’ll call them “the lucky ones,” because once you’ve hit one ball in the water, the follow-ups don’t tend to get much easier.

There were triple bogeys: Henrik Stenson made 6 after going long in the water, hitting the green and three-putting.

There were quadruple bogeys: In addition to Casey’s horror film above, Wyndham Clark made 7 after hitting one in the drink from the tee and another from the drop zone.

Charl Schwartzel added a quintuple-bogey 8; he did the same thing as Clark but finished things off with a three-putt.

Kevin Na also added an 8 in particularly dramatic fashion: He hit three balls in the water, his fourth attempt hung up on the edge of the rough and then he chipped that in to avoid double digits. Na did avoid officially posting a big number; he promptly withdrew on his way ’round the turn, citing a back injury.

If you take Na and flip it around, you get “An.” That’s sometimes called a semordnilap — when one name reversed makes another. Ben An made 11 at No. 17. That’s called an octuple-bogey. But while Na followed his big number with a WD, An followed his with an admirable sense of humor.

Opinions on the setup at 17 varied. Golf Channel analyst Paul Azinger called it “a sucker pin,” suggesting that if golfers just took their medicine and played to the middle of the green they’d be just fine.

But several golfers suggested that the 17th green, which was redone this summer, is firmer than the rest. That conditioning, they said, likely contributed to the number of balls that landed on the green and ended up in the water long.

Justin Thomas landed his wedge shot pin-high only to watch it bounce into the water.

“It played really, really short,” he said. “I mean, that green is substantially firmer than the rest of them, I would say. I had a 5-iron on 2 today that rolled out probably eight paces and then I had a pitching wedge on that hole that rolled out like six. So that, it doesn’t add up, and they were very consistent over the course except for that hole.”

Matthew Fitzpatrick, who was on the first page of the leaderboard after a four-under 68, felt variability throughout.

“If I’m going to be honest I felt all the greens were very, very different firmness, different speeds. I found it really unusual. There’s some burnt out and there was some that were really green,” he said.

No. 17 played to 143 yards on Thursday, with wind helping from behind and blowing right-to-left. The vast majority of the hole’s 27 water balls ended up just long and left, overaggressive plays to the back-left hole location. Several more ended up on the grass walkway connecting the island green to the mainland. And several more just held up on the very back edge of the island, which is guarded by a thin strip of rough.

Corey Conners was unfazed by the setup. “I wouldn’t say it was anything crazy today. I landed my shot kind of into the slope and it came back. I think all the guys know if you land it up top it’s got the risk of going over the green. But yeah, I wouldn’t say it was that unusual.”

And Lee Westwood, who escaped with a par, provided the sagest advice of all.

“I never try and get it back there,” he said. “There’s like a crown in the middle of that green and I played here years ago and I played a practice round with Nick Price who said, just try and land it on that crown every day; ignore the flags. And if you walk off 17 with a 3, I think you’re more than happy.”

Most of the way through Thursday’s round, No. 17 was playing to a stroke average of 3.46, the second most difficult hole on the course. Golf gets much more difficult when you start counting by twos, after all. The bad news for players who’d survived the island green?

No. 18 was playing even harder.