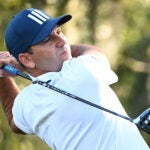 Webb Simpson, the second player to tee off in the 7:40 a.m. grouping, was going over his yardage book. Rory McIlroy, the third player, already had the headcover taken off his driver. It was now just a shade around 7:39 at TPC Sawgrass. Where was the first player?

Still about a wedge shot away.

“I thought I had plenty of time,” Sergio Garcia said. “Obviously I left the range at 7:35 — I was teeing off at 7:40 so I figured it’s going to take me probably two, three minutes at most to get to 10. I don’t know if the clock on the range was behind or something, but when I got to the putting green just like 50 yards short of 10, I kind of looked at it and sun was coming up so I couldn’t see if it was 7 of the 38 or 7:39, but just in case, I just took a little stroll, made sure that I got there before it turned to 40.

“But I think it was just about to turn to 7:39 so I actually had a little bit more time than I thought.”

Garcia’s caddie walked up to the tee box. Then Garcia. He fist-bumped McIlroy, then Simpson, who was laughing.

About a minute and 10 seconds later, Garcia’s fairway wood found the left side of the fairway. About four-and-a-half hours later, Garcia had found himself at the top of the leaderboard after firing a seven-under 65 during Thursday’s first round of the Players Championship. From nearly missing his tee time. To missing nearly nothing.

“I don’t know, I just love it,” Garcia said of Sawgrass. “I’ve always said it, Valderrama and this course are some of my top favorite ones, and for some reason, they just, it just kind of fits my eye. I see what I want to do pretty much every hole and then it’s a matter of doing it, but definitely I feel more comfortable and I’ve done well. So all those things help.”

Garcia parred his first five holes, birdied the par-4 15th on an 18-foot putt, then eagled the par-5 16th after hitting his approach to within 9 feet. He bogeyed 1 and birdied 2 before finishing birdie, birdie, eagle on holes 7 through 9. On the par-5 9th, he dropped his second shot, from 267 out, to within 18 feet, then dropped the putt.

“I was able to hit a beautiful hold up 5-wood just right of the hole, landed in a perfect spot to be able to hold the green, which is never easy there, and left myself an, actually a really nice uphill putt, pretty much straight, maybe left edge,” Garcia said of the 9th hole. “And I was fortunate enough to roll it in.”

And fortunate to tee off. Garcia wasn’t the only one to be a little off. The starter announced him as an “11-time PGA Tour winner, including the 2018 Players Championship.”