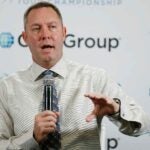 Mike Whan, pictured in November 2019, announced Wednesday he's stepping down from his role as LPGA commissioner.

There are many ways to measure Mike Whan’s impact on the LPGA. Numbers tell one story — when he took over as commissioner 11 years ago the tour had only 24 tournaments and official prize money of $41.4 million while in 2021 the women of the LPGA will play for a record $76.5 million across 34 official events…in the midst of a global pandemic.

Another feather in Whan’s visor are the creative initiatives he spearheaded: the founding of two elite new tournaments, the International Crown and the Founders Cup; the creation of the season-long Race to the CME Globe, which is a more streamlined and satisfying version of the FedEx Cup; a groundbreaking partnership with the Ladies European Tour. He helped make the LPGA among the most fan- and media-friendly universes in all of sports thanks to both his impossibly upbeat demeanor and his constant exhortations to his players to “act like a Founder.”

But Whan’s greatest trick is that even while running the oldest and biggest women’s professional sports league he had a profound impact on so many individuals.

“He changed the culture,” says tour veteran Christina Kim. “For a long time the LPGA was marginalized and I think many players just accepted that. Mike ingrained in us that we matter, that we’re amazing golfers and not just amazing female golfers. That we deserve to be celebrated and treated as equals. He empowered us so much by seeing the potential in each of us and investing the time to get us to see it, too.”

The mutual affection between Whan and his players explains the outpouring of emotion that followed his announcement on Wednesday that he would be stepping down as commissioner later this year. Nancy Lopez said on Wednesday she had been crying off and on all day while Kim says, “I’m shocked and sad. I haven’t been this emotionally shaken in a very long time.”

But for Whan, 55, this simply felt like the right time to step away.

“One of the hardest jobs of a leader is to know when their work is done,” he wrote in a statement. “If the COVID-19 pandemic taught me anything, it was that the LPGA executive staff has full control of our business and is capable of incredible things. We have leaders who are visionary, compassionate, collaborative and humble. You may not agree with every decision they make, but they have led our Tours to new heights virtually every year.”

Whan arrived at a particularly fraught moment for the LPGA. The global financial crisis had corporations slashing their investment in sponsorships and the tour was still reeling from the acrimonious ending with his predecessor Carolyn Bivens, who had engaged in Machiavellian internal politics. Whan’s pledge from the very beginning was to be transparent about the business of the tour (and everything else).

Stories are legion of his late-night texts and early-morning phone calls to players to solicit feedback and talk through potential problems. Every woman on Tour had his cell number and they were made to feel welcome to use it.

Whan also unabashedly catered to the LPGA’s sponsors. If this led to the occasional indulgence (like letting Evian buy its way into major championship status) Whan has no regrets and the players remain fiercely loyal.

There has already been chatter on social media that Whan would be a natural to succeed Mike Davis at the USGA. On Wednesday, when asked directly about that plum job, Whan didn’t dismiss it out of hand but allowed that he needs time to “cleanse my brain.” After living and breathing the LPGA for more than a decade he has earned the downtime, his place in the annals of the sport already secure.

As Ron Sirak, the dean of LPGA scribes tweeted, “He’s on my Commissioner Mt. Rushmore with the best of all sports.”