Michael Whan still doesn’t understand it. How did one tweet generate so much buzz? “I tweet a lot,” he says, “Most of the time no one cares.”

Last Thursday, hours after the LPGA postponed its next three events due to the Coronavirus, the LPGA commissioner pondered how it would impact his players. He grabbed his phone.

To all sponsors who endorse @LPGA athletes. PLEASE consider disregarding # of events they play or how many times they are televised in ‘20! I know they want to play, but we are keeping them (and others) safe. Please don’t penalize them for my decisions!! Respectfully, Mike

The tweet blew up. Nearly 300 retweets and more than 2,500 likes. The next day he even asked his communications team why it was so well received. One young staffer spoke up. “Because in the middle of what had to be the worst day for you and us, you were thinking about them,” they said.

“I find that strange,” Whan says. “I have met [NBA commissioner] Adam Silver a couple of times. I don’t know him that well, but I can promise you that night after he canceled that season, he was thinking about NBA players. He may not tweet about it or tell you that, but this is personal.”

During a time when the world looks to its leaders amid a pandemic, the LPGA commissioner has been a strong and confident figure for his players and staffers. He recently spoke with GOLF.com about his viral tweet and its surprising support, how the LPGA handled its events amid the coronavirus (and how the PGA Tour handled the Players) and more.

The LPGA formed a COVID-19 Crisis Team weeks ago

“I think maybe the LPGA, in a strange way, was a little ahead of the curve,” Whan says.

On Jan. 30, the LPGA canceled an event in China due to coronavirus concerns, and two more events, one in Thailand and one in Singapore, were canceled on Feb. 10. The LPGA, with its global tour, was being introduced to the reality of the coronavirus much earlier than most of America. 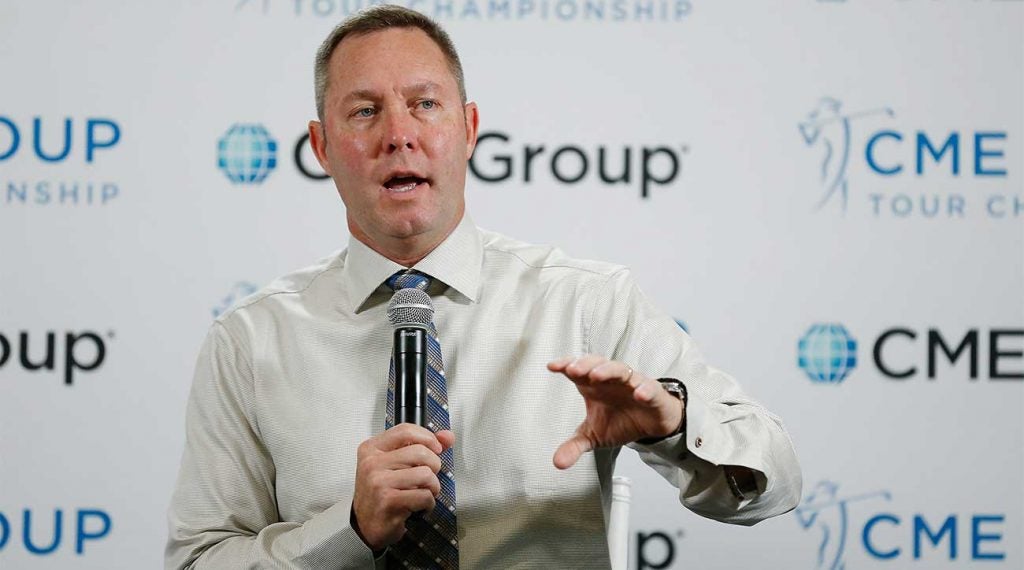 It was during this time the LPGA formed a COVID-19 Crisis Team to address the ever-changing situation and figure out how these events might have to run differently, if at all. The 25-person team consisted of tournament operators, TV partners, staffers who worked with sponsors, workers from player communications, player services and more. The group met twice a week — 11 a.m. sharp — to discuss the latest. Every meeting started with an update:

What do we know? What’s happening in the marketplaces we are playing? What are local governments saying about large gatherings? What’ the latest from the CDC?

After the initial three events were canceled, which was coupled with a scheduled week off for travel, the Crisis Team went back to meeting once a week, but as soon as the virus started circulating more heavily in the U.S. the team went back to every other day and then, like last week, daily. The entire time Whan was communicating with the LPGA’s 14-person Board of Directors, which includes six active LPGA members.

The Crisis Team meets every other day now. The next three scheduled events are the major topic, which are in Hawaii (April 15-18), LA (April 23-26) and San Francisco (April 30-March 3).

How the PGA Tour handled the Players Championship

PGA Tour Commissioner Jay Monahan received some criticism with how he and the Tour handled the Players Championship, at first deciding to play on and allowing spectators for the first round before banning them for the final three days. Eventually, the tournament was canceled. In contrast, Whan was largely praised for his prompt postponement of the LPGA’s next three events, but he says that’s not fair. His league wasn’t playing that week.

“I didn’t have all my Tour payers and caddies and media at a facility,” he says. “I didn’t have the place roped and staked and agronomists putting the tees in.”

Whan said he talked with Monahan often about their situations, and he spent most of Wednesday in meetings with him. Whan announced the postponement of the LPGA’s next three events — one in Phoenix and two in California — on Thursday, about five hours before the PGA Tour canceled the Players and its next three tournaments. (Right up until the LPGA postponed its next three events, its plan was to play without fans and use a small volunteer base with each player receiving four or five tickets for family members.)

“There is nothing I can relate with more than fighting as hard as you can for your athletes’ opportunities and delivering to the sponsors what you told them you’d deliver,” Whan says. “I can relate, and to me any commissioner that wasn’t fighting to protect the financial opportunities of his players wouldn’t be someone who I could understand. Bottom line is within five hours we were all within the same place, so arguing over the difference of a few hours is almost a waste of time.”

On tweeting to sponsors on behalf of his players

Again, Whan doesn’t see the big fuss about his tweet. He was just doing his job, he says, but he also thinks the general public doesn’t understand the situation some of his LPGA players are in.

“There is a huge difference between the guaranteed incomes of a male pro golfer and a female — I hate it,” Whan says. “It’s the thing that probably drives me the craziest about what we are trying to accomplish. The reality is you ask a typical sports fan about an athlete, and they probably think they got a five-year deal with a two-year option and a no-trade clause. They got all these incentives for performances and guaranteed income. The women on the LPGA have none of that. They get paid when they play, and in fact only when they make the cut.”

News
How is the coronavirus pandemic affecting recreational golf?

With all the individual business decisions LPGA players make as independent contractors — hiring and firing caddies, coaches, etc. — Whan says it turns them into “incredible businesswomen” at a very young age. But still, the majority of them need to play.

“I don’t know if things have changed, but if you go back to my days at TaylorMade or Wilson before I got to this level, most of those [sponsorships] had a number of events you had to play, and TV appearances, and how many times you were on a certain leaderboard, and I was just lying in bed and thinking to myself …. about the 24-year-old sitting there not knowing how she’s going to make it through until we tee it up again. I just wanted sponsors to realize there is a human being on the other side of that agreement.”

A call from the commissioner

The day after Whan tweeted to sponsors, he called every rookie on the LPGA Tour who was in one of the events that was canceled, which he says was about 15 to 20 players. He said while some had made a couple of starts overseas, these were some of their first big-time tournaments in the U.S., ones in which they would have surely circled on the calendar.

“They probably spent their whole life trying to get to this level, probably working out since November and working with a swing coach and got the whole posse ready to go and probably had bags packed and a travel bag of golf clubs sitting in the kitchen when they read my email that said we are done for the next three weeks,” he says. “Those are the visuals that pop in your head when you are driving to work the next morning. I’m still going to work tomorrow. I got a lot to figure out, but these kids, they earned better than I have given them, and that’s what goes on in your head.

“I just wanted to tell them that I’m thinking about them, and I promise I’m going to do everything I can to get you out there as soon as I think it’s safe.”

How Whan’s day-to-day is different now

Like the majority of the U.S., the LPGA now has its employees work from home. Whan still drives into the office, though, since he’s technically social distancing by being the only one there. Plus, he’s admittedly not as tech savvy as some of his younger staffers, so he likes being in the familiar surroundings of his office.

Usually, Whan says, he’s spending about 100 percent of his time at this point of the season finalizing the next season’s schedule. Now? Not so much. The Tour hasn’t started setting up at its next three stops yet, as Whan says he doesn’t want to spend unnecessary money if these events will get canceled anyway. As of now they are preparing to play without fans.

“Right now I spend 100 percent of my time on the events we either canceled, and are working to reschedule them, and where and how, and helping other tournaments concerned about their date work through this,” he says. “There’s virally no future thinking right now. Right now we are thinking, ‘How do we save 2020?’” 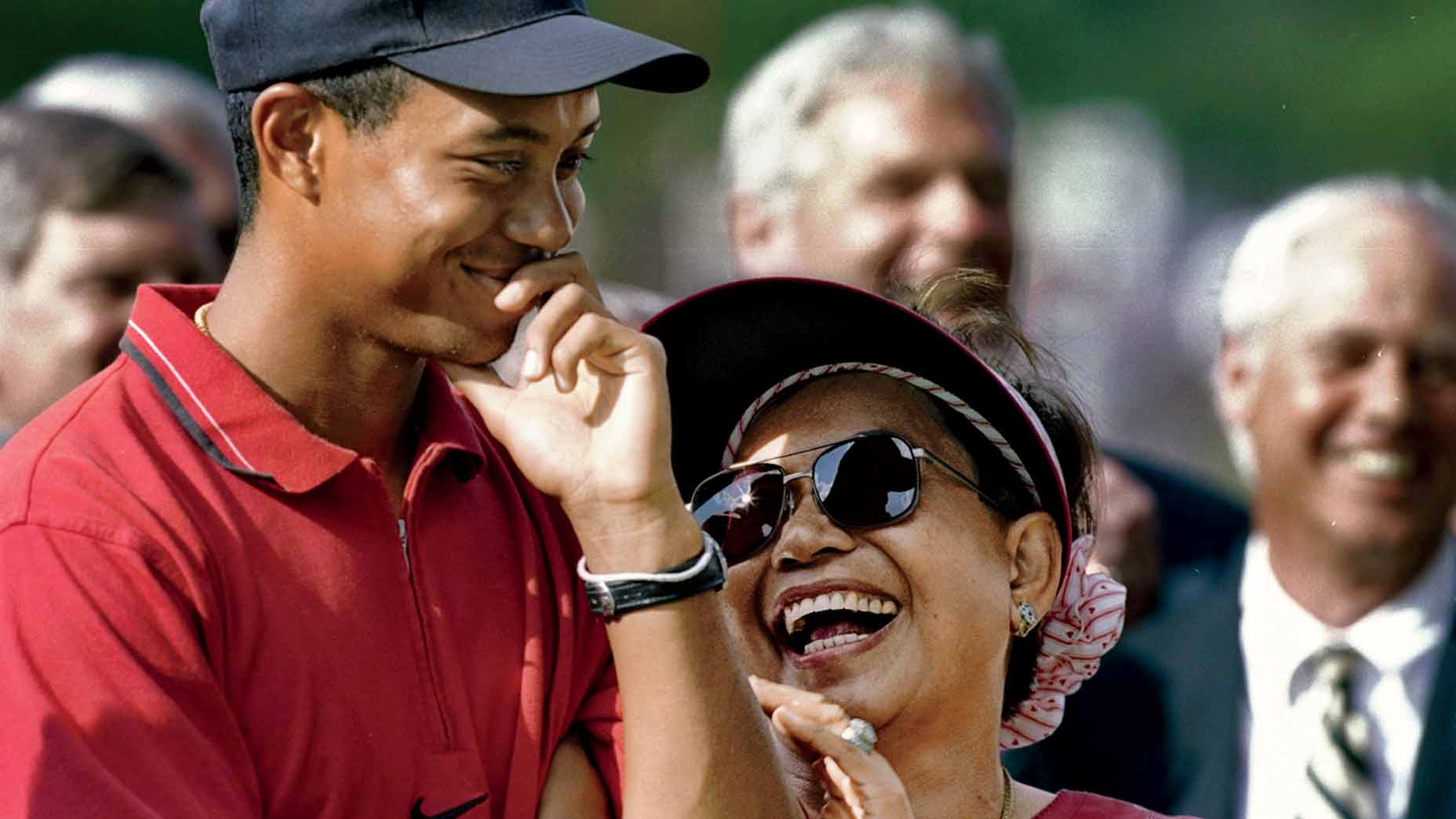 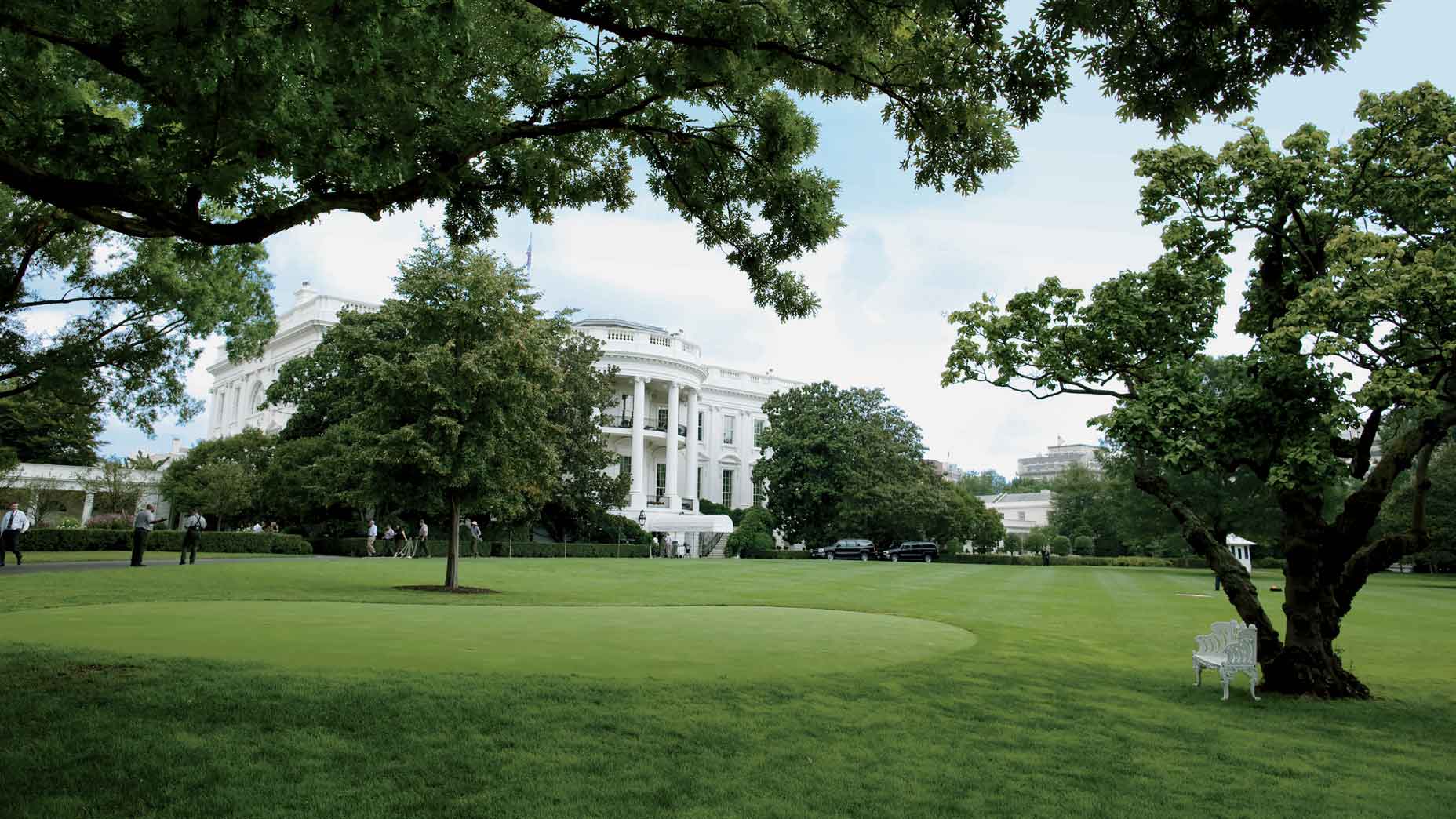 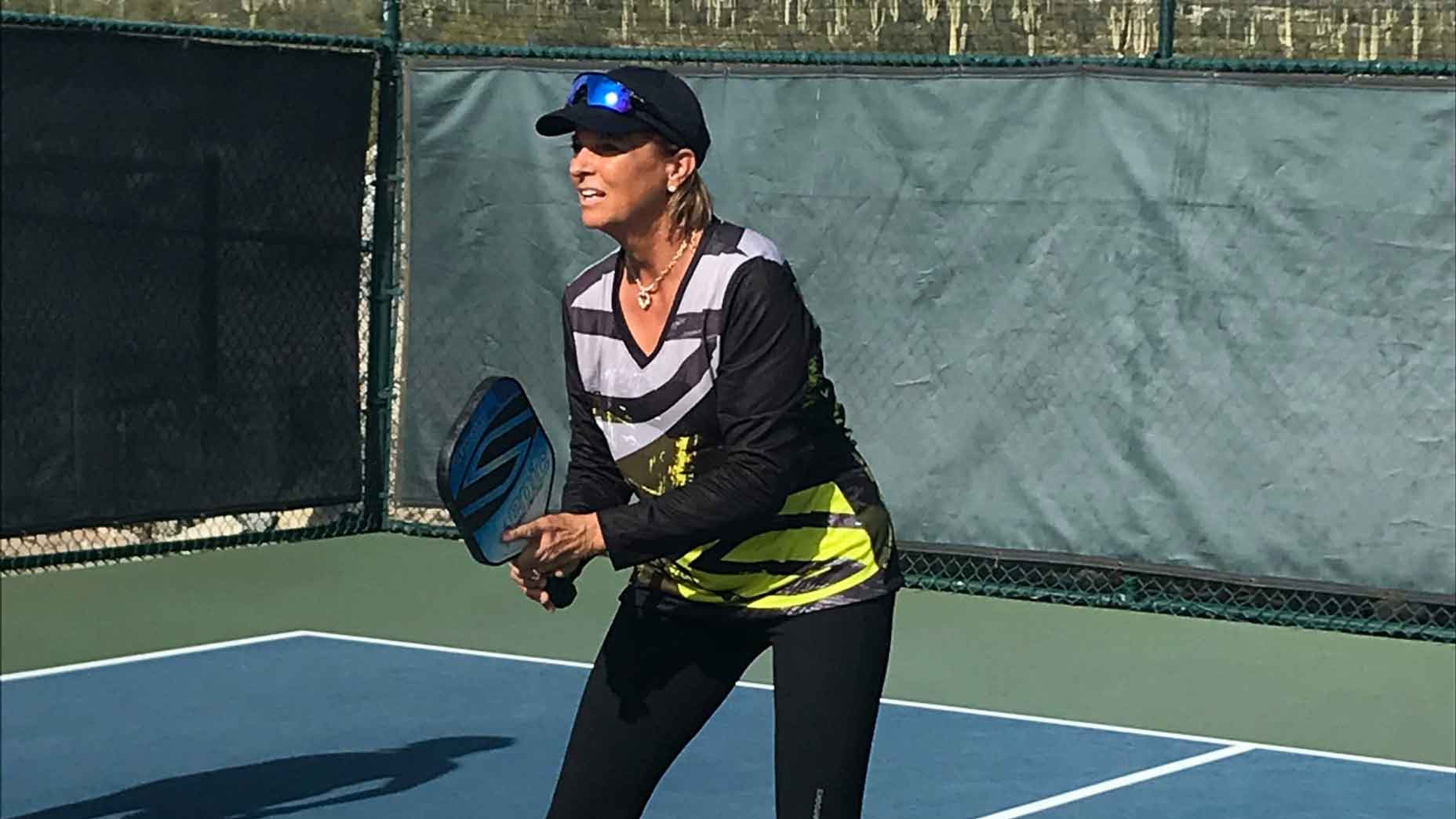 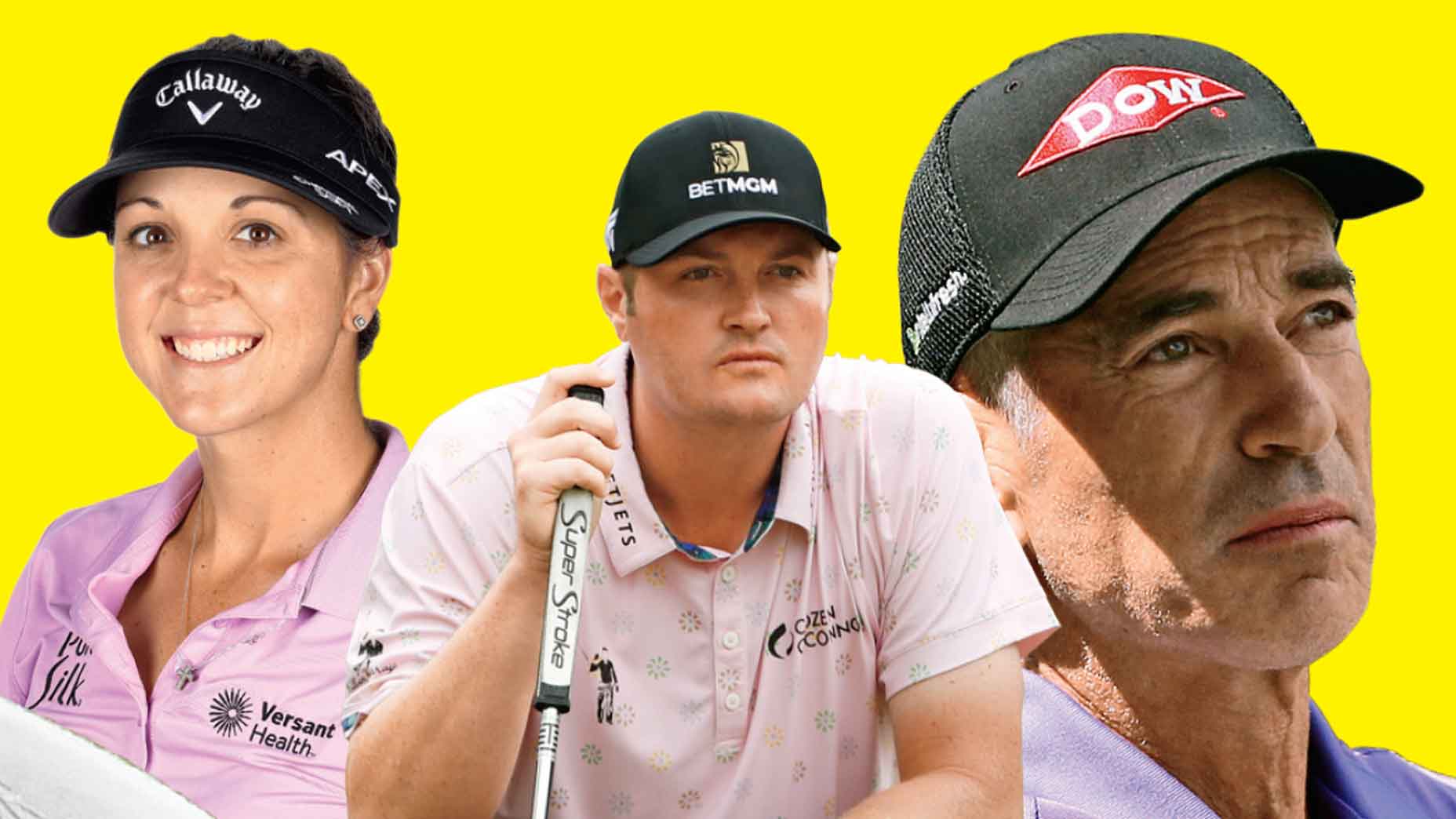 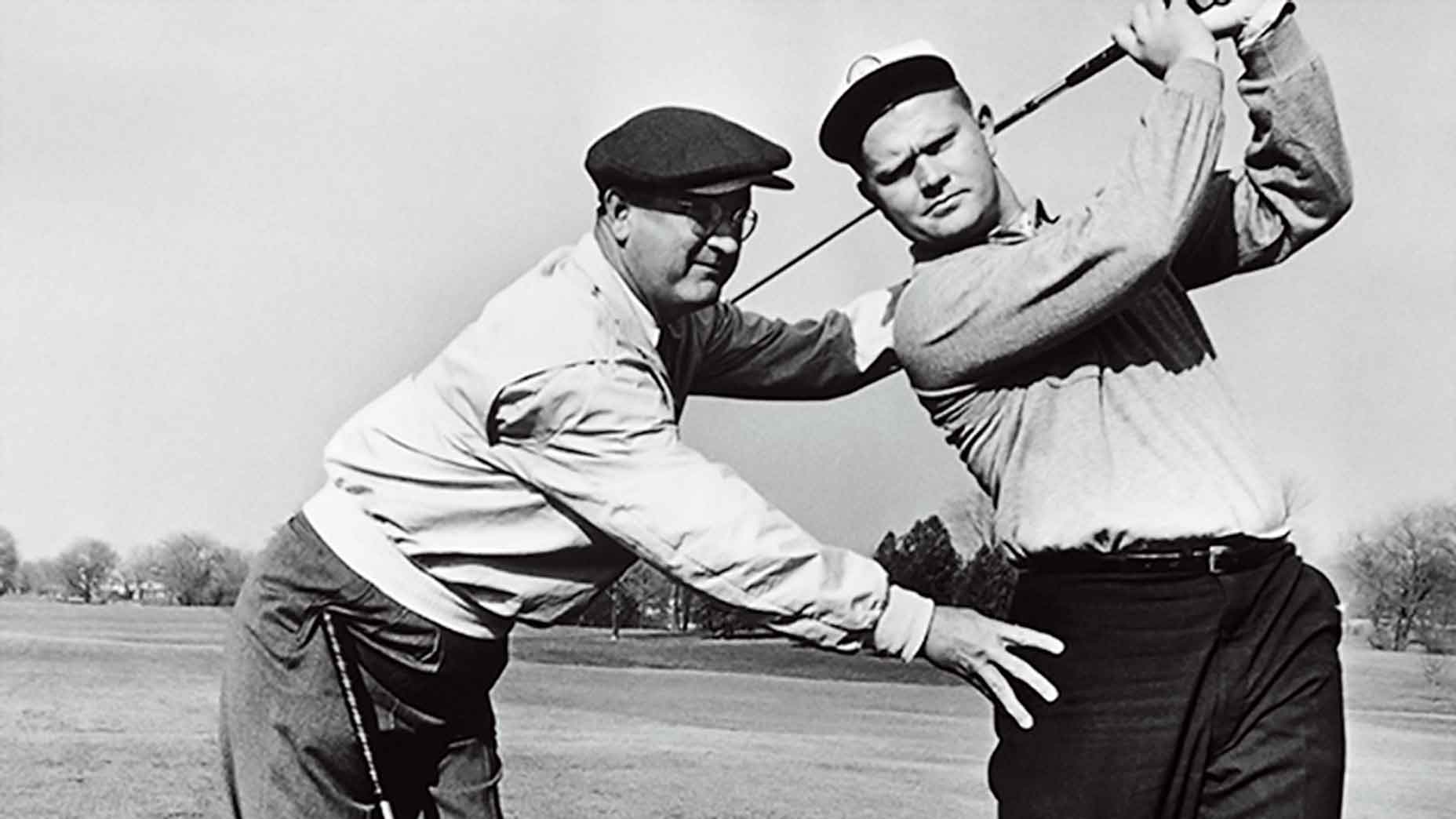