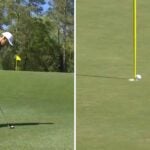 Things seemed to be unraveling for Scottie Scheffler early on Sunday at the 2022 Masters.

His three-shot lead to begin the day was cut to one over the first two holes. His playing partner, Cameron Smith, began the day birdie-birdie and hadn’t missed a shot to start the final round. To make matters worse, Scheffler’s drive at the 3rd hooked well left of the fairway into the pine straw. His six-shot lead from Saturday afternoon seemed like a lifetime ago.

Then, the 25-year-old hit the shot of the tournament.

After leaving his approach short of the green, Scheffler faced a near-impossible up-and-down. The green was well above the ball, and getting the ball within gimme range would require a perfect shot.

That’s just what he got.

Scheffler drove his chip shot into the slope protecting the green and watched as his ball skidded onto the putting surface. The ball began rolling at the hole with pace — so much that it looked like he’d have a long par try coming back. Instead, it struck the middle of the flagstick and dropped into the hole.

“Is that any good?!” shouted CBS analyst Frank Nobilo. “What a three for Scheffler!”

The unlikely shot turned what looked like a guaranteed bogey into a spectacular birdie. After Smith failed to get his ball up-and-down from nearly the exact same spot, Scheffler’s lead was back to three.

Most Masters winners have a defining Sunday moment in their march to the green jacket. This very well could be Scheffler’s.