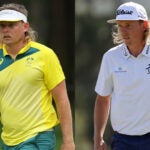 The changes Cameron Smith has made off the course have been equally key to his success.

AUGUSTA, Ga. — Cameron Smith’s putting gets a lot of attention, and understandably so. Hit putter is his paintbrush, the greens his canvas, and he golf’s answer to Picasso.

But what’s interesting is that Smith’s best golf has coincided with a marked improvement at the other end of the bag.

Simply put, the Masters contender is swinging faster now and driving the ball longer because of it. His clubhead speed was just 111.7 mph during his first season on Tour in 2015, but he’s increased it to 115 mph this season. It helped him gain about 10 yards per drive (from a 286 average to 297 yards).

It started with a three-month offseason workout routine. Each month started with a different focus, and each session featured exercises targeting specific areas of his body.

Smith got stronger, more flexible, and felt better, too. But as the season began, he dialed it back. He’d start to gain weight and his stamina would start to suffer. It was only recently that he adopted a more year-round approach, which included increased weight lifting and more cardio.

“The last five or six years I’ve been really inconsistent with my training, and probably the last eight months or so I’ve been just really consistent,” he said. “I lost a little bit of weight and my body moves a little bit quicker when I don’t have so much around my belly.”

He’s noticed positive knock-on effects all over his game: His swing isn’t just faster, but being more fit has also helped his technique improve. He looks and feels better, and crucially, this week, he’s less taxed after rounds.

“I feel like I’m able to walk off the golf course and not be wrecked,” he says. “I feel pretty fresh walking off the golf course, which is a feeling I don’t think I had for a long time. It’s I think why my game has probably got a lot more consistent through four rounds.”