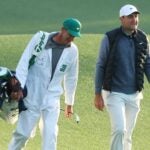 Will Scottie Scheffler close things out at the Masters? GOLF's Editors discuss.

Scottie Scheffler is out in front at the 86th Masters, but his five-stroke lead he held after 36 holes has been trimmed to three. Scheffler sits at nine under, and the chasers include Cameron Smith (six under), Sungjae Im (four under) and Shane Lowry and Charl Schwartzel (both at two under). Justin Thomas and Corey Conners (both at one under) are the only two other players under par. Who will win the Masters come Sunday night?

Sean Zak, senior editor (@sean_zak): Scottie’s got it. Book it. Even when he’s been bad at all this week, he’s been pretty damn good. Case in point, that hell-to-heaven bogey be made on 18 today.

James Colgan, assistant editor (@jamescolgan26): You’re ALL welcome to pick against Scottie, but you’ll all be wrong. The dude is entering Masters Sunday with a three-stroke lead and only two players within six shots of him. Not all Masters Sundays are created chaotic, and this one won’t be.

Jessica Marksbury, senior editor (@jess_marksbury): I want to believe in Scottie, but we all know that Sunday afternoon at the Masters is a different animal, and a three-shot cushion is basically nothing. Cameron Smith’s stellar season has been somewhat overshadowed by Scheffler’s recent play, and I think he’s just under the radar enough to play a calm, composed and red-hot round tomorrow to lay claim to the green jacket.

Dylan Dethier, senior writer (@dylan_dethier): It’d be awfully boring if everybody picked the guy with a three-shot lead, wouldn’t it?! I’ve got Cameron Smith taking down Scheffler, with big-time runs from Corey Conners and Rory McIlroy sending the entire thing into temporary chaos.

Nick Piastowski, senior editor (@nickpia): Scottie. The shot he hit into 18 — after hooking his tee shot, searching for his ball, talking with a rules official, cleaning off pine straw and leaves (but not dirt!) and dropping his ball — showed what’s made him great over these past few months. He wins by three.

Josh Berhow, managing editor (@josh_berhow): Wow, this many Scottie Scheffler picks? OK, I’m buying, too. He’s been the best player all week and hasn’t shown any signs of cracking in any of his recent wins. A three-shot lead is enough for me to be convinced he’ll pull it off. But man, Cameron Smith has been on fire lately too. This thing could be flipped very early. It should be a blast.