‘Run it back’: Why ESPN, CBS are aiming small at the PGA Championship 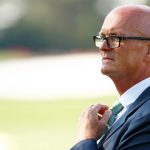 Scott Van Pelt and ESPN have no plans to change heading into the network's second PGA Championship broadcast.

On the topic of its inaugural PGA Championship broadcast at TPC Harding Park last August, ESPN would like to apologize. For absolutely freaking nothing.

“It’s the rarest of rare things,” star anchor Scott Van Pelt said in a press conference late last week. “Golf Twitter hates everything, and for some reason they were happy with what we did, so we’re just going to try to run it back.”

Van Pelt has once again been tasked with spearheading the network’s PGA Championship coverage this week at Kiawah Island. This year’s tournament will mark only the second date for the Worldwide Leader with the PGA of America, but the two partners have fallen quickly for one another, and it’s easy to see why.

“We’re going to try to give people a ton of golf shots,” Van Pelt said of the network’s biggest strength heading into Year 2.

Expectations were low for both parties for last year’s Bay Area maiden voyage. Placating golf fans ravenous for their first major championship in 16 months would probably be as simple as getting on-air each afternoon. This was welcome news to ESPN, because getting on-air was about all the network could promise.

Strict new pandemic protocols meant fewer hands and less access on the course. Behind the scenes, production crews were to be masked and socially distanced, heightening the risk of miscommunication. And the kicker: excluding the Masters — which is influenced by Augusta National’s notoriously heavy-handed rules — ESPN hadn’t covered a “normal” golf tournament in a half-decade.

“You know what it was like?” Van Pelt said. “It was like ravenous hunger, and we just gave you a meal, and people were so excited to see a big-time event.”

With the calendar turned to 2021, ESPN enters Kiawah Island with the modest goal of keeping things rolling.

“I think, look, a West Coast major, I think we all understand you’ve got prime time, and it was a cool golf course,” Van Pelt said. “This is a cool golf course. We’re going to try to bring the same level of enthusiasm to be there, to cover a great championship on a great venue, be together.”

Of the minor tweaks ESPN has planned: Suzy Whaley, the former PGA of America president, will serve among a star-studded group of on-course analysts and reporters. Marty Smith, who recently signed a long-term contract extension with the network, will join names like Michael Eaves, Andy North, Curtis Strange, Gene Wojciechowski and Colt Knost throughout the week.

Things won’t look much different on the weekend, either. CBS Golf coordinating producer Sellers Shy said his team will experiment with a robotic camera in the bunker guarding the 17th green, and will implement several technological improvements first seen at the Masters, including the 180-degree “4D Replay” camera and the Sony Venice ultra-high-definition camera. Other than those tweaks, the final product should have a comfortable flow, both from ESPN to CBS and from last year to this one.

“So much of that with the ESPN coverage is CBS technician, CBS production people, I think that’s lost on people,” said Jim Nantz, who will call his 31st PGA Championship this weekend. “People try to say, well, their coverage was like this and CBS coverage like that. Wait a minute, if you’re trying to differentiate, it’s all coming from the exact same production and technical teams. And people work long hours on the production and technical side. And it’s incredible what that undertaking involves.”

CBS will claim a dozen hours of live coverage at the Ocean Course to ESPN’s 18 (all afternoon on Thursday and Friday and from 10 a.m.-1 p.m. ET on Saturday and Sunday). Digitally, the worldwide leader will add another 16 hours of coverage on its streaming platform, ESPN+. That’s a ton of golf, but as far as Van Pelt is concerned, that’s kind of the point.

“We truly don’t get to be around each other a lot, so I think we’re going to enjoy each other’s company, enjoy the stage we’ve got and try to bring as many golf shots as we can to the viewer,” he said. “You can always be better but I don’t think any of us left [Harding Park] thinking, Man, we shanked the coverage. I think largely people enjoyed it, so that’s our hope, that they’ll enjoy it again.”