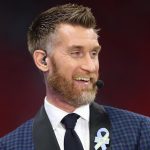 ESPN's Marty Smith has earned a fast reputation as one of the network's most beloved reporters.

Don’t bother asking Marty Smith how the hell he landed the most enviable job in sports.

Don’t bother asking how the child of a cattle farmer from Pearisburg, Va. (population 2,652), amassed 305,000 Twitter followers. Or how a NASCAR writer with no television experience became ESPN’s jack-of-all-trades reporter, covering so many events across so many sports he’s lost track of his frequent flyer miles (by last check, somewhere around 500,000).

Truthfully, he has no idea.

Truthfully is Marty Smith’s only state of being. He is magnetically earnest — a quality that has endeared him to millions of sports fans through his day job at ESPN, and that briefly made him a viral sensation after a heartwarming interaction with a local sports reporter late in 2019.

It is also a quality that has endeared him to management at ESPN, earning him a new, multi-year contract with the network, GOLF.com has learned.

The new contract, which begins at next week’s PGA Championship, only figures to amplify his voice at the Worldwide Leader — not that it needs amplifying. A close look at Smith’s work schedule over the last two months reveals all one needs to know about his role at the network:

– Los Angeles for the fallout of Tiger Woods’ car accident
– Nashville for the SEC basketball Tournament
– Myrtle Beach, S.C., for Masters preview coverage with Dustin Johnson
– Augusta, Ga., for the Masters
– Clemson, S.C., to report on future Jacksonville Jaguars quarterback Trevor Lawrence, then to Seneca, S.C. for the NFL Draft
– Louisville, Ky., for the Kentucky Derby
– Kiawah Island, S.C., for the PGA Championship

Why is Marty Smith so busy? Mostly because he believes his job provides him an avenue to his purpose in life. A purpose that appeared to him, fittingly, in an interview.

“I was interviewing Tony Finau at Augusta Country Club about three weeks or so before the Masters in 2018,” Smith remembers. “I’m interviewing Tony, whom I had never met. I asked him, ‘What’s your purpose?’

“It’s to be a light in the world,” Finau said. “It’s to have so much joy emanating from me, coming out of me, that everyone in my midst can’t help but feel it.”

“I said, ‘Tony, we’ve never met. I’ve asked God every day, Why me? What am I? What do you want from me with all this? And for the first time, somebody’s answered that question.'”

“I said, ‘Tony, we’ve never met. I’ve asked God every day, Why me? What am I? What do you want from me with all this? And for the first time, somebody’s answered that question.'”

The path to Marty Smith’s purpose began at NASCAR.com, where he started out as a writer penning a popular weekly column. In 2006, ESPN bought the broadcast rights to the sport and began assembling a collection of talent to cover it.

“I had never done TV, and I get a call from ESPN that says, ‘Hey, we are putting together our NASCAR team for 2007 and beyond, we are going to re-enter the sport as a broadcast partner, and everyone we speak with says your name,'” he said. “I said, ‘First of all, that’s awesome. Thank you. But I think you got the wrong Marty — Marty Snyder, who is a brilliant broadcaster and a fantastic person, and a great friend of mine, I have his number. I can give it to you.’ And [ESPN vice president of production] Jack Obringer started laughing. He goes, ‘No dude, they keep they saying you.”

In the beginning, Marty was a NASCAR insider earning only two minutes of airtime per week. Still, television came slowly, even for a self-professedly long-winded sportswriter.

“I was not self-confident as a writer and certainly not on television for a very long time. So much of what drove me was insecurity, not passion. It was insecurity,” he said. “Then, as I gained a little more self-confidence, I realized that my calling card was passion. I realized that it’s okay to be unbridled in your appreciation for all of this. It’s okay to be grateful, and to openly express the gratitude of how damn awesome it is to be at the Masters.”

A decade later, Smith looks cut from central casting for sports television stardom. His passion is still the essence of his personality, in front of the camera and otherwise, the intensity of which is impossible to fabricate. His voice, once a point of struggle, pours out of him in paragraphs and anecdotes.

In many ways, his unflinchingly genuine personality is an unusual fit for the dulcet world of golf television, where he first made the jump in 2017 with the news of Rory McIlroy’s 10-year deal with Nike. But in a sport defined by its personalities, Smith has a knack for getting the most from his subjects (among them, Tiger Woods). At next week’s PGA Championship, he will once again take on a prominent role for ESPN, handling SportsCenter coverage throughout the week and conducting post-round interviews in rounds one and two.

“I did not expect this when I started dipping my toe in the golf water. I didn’t expect to jump in the water like this,” he said. “Man, I’m swimming. I am swimming laps. I am in the lake.”

Between golf, college football, the NFL, NBA, NASCAR, professional soccer and, yes, Formula 1, it might be easier to count the sports Smith hasn’t covered than the ones he has.

“I’m grateful beyond words,” he said. “You know, as a kid who grew up in Appalachia, who had massive dreams, and believed he was going to take over the world. The fact that ESPN and my bosses continue to believe in me that I might be able to deliver something unique and introspective and offer perspective from athletes just blows my mind. I’ll never get used to it, I’ll never forsake it, and I’ll forever be grateful for it.”

Truthfully, Smith never set out to land the most enviable job in sports. Sometimes, greatness comes from goodness.

“I’m not the best reporter. I’m in a world with people like Tom Rinaldi, man, those are just the facts,” he said with a laugh. “I will never be outworked. I will never be out-passioned, and I’m going to be kind, because I control those things. Kindness, effort, passion. I control them, and they resonate, they just do.”