In replacing Tom Rinaldi, prepare to see plenty of ESPN’s Michael Eaves at the Masters 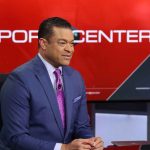 ESPN broadcaster Michael Eaves would like you to know that he does not fancy attending sporting events in his free time.

“There was a time when I used to do 120-130 live events a year,” he told GOLF.com. “You know, it’s like a doctor. The last thing they want to do when they’re not working is go to a clinic, right? It’s the same thing. I’ll watch them on TV, but the process of having to go to a sporting event when I’m not working? Nah.”

ESPN broadcaster Michael Eaves would also like you to know the rule decidedly does not apply to a certain golf tournament in Georgia.

Next weekend, Eaves will work his fifth Masters for ESPN and first since assuming post-round interview duties from reporter/storyteller Tom Rinaldi. Rinaldi left ESPN in January after more than two decades with the Worldwide Leader for rival Fox Sports, leaving behind a sizable hole in many of his former employer’s biggest properties, the Masters chief among them.

Eaves will not be Rinaldi’s full-fledged successor at ESPN — at the Masters or otherwise — but perhaps that’s what makes him so uniquely adept to handle a broader swathe of responsibilities at Augusta National.

“I’m glad it’s not an essay-writing contest and I’m following Rinaldi,” he said. “Tom could make you cry at your own funeral. But talking to DJ after he shoots six-under 66 to take the lead going into the weekend on Friday? Yeah, I can handle that.”

The Kentucky native is a golfer both by choice and by blood. Years before he was a sports television reporter covering the WGC-St. Jude Invitational in Memphis, Michael Eaves was the first Black golfer to qualify for the Kentucky state golf tournament in his senior year of high school. And years before he was a fledgling walk-on at the University of Kentucky (learning, he says, how good he wasn’t at golf), he was a boy who wanted to be just like Dad.

Eaves’ father, James, was a U.S. Army veteran and late-life convert to golf. He died when Eaves was in his early 20s, but not before instilling in his son a passion for the sport and its most revered invitational. For years, the younger Eaves dreamt of covering the Masters, but his career interfered. At one job, Augusta National declined his credential request. At another, his job focus strayed into other sports.

“I told them that I was a huge golfer, a golf fan, and I really enjoy covering the sport,” he said. “I sort of planted that seed with him, very early on, and then eventually just threw out some golf work that I did around SportsCenter and some feature stories that I did.”

In 2017, Eaves’ persistence paid off when ESPN invited him to anchor SportsCenter live from Augusta National. And today, a half-decade later, he still remembers his first walk around the grounds with his father.

“I started playing when I was a kid,” he said. “My father picked up the game late in life, and I just always wanted to be around my dad. I just know that he would have got such a big kick out of me going to the Masters, going to Augusta National, and being able to cover that event. Meeting Jack Nicklaus and Gary Player, and having these interactions with people that he and I used to watch on television, all those years.”

Michael Eaves would like you to know one more thing: when he says he loves working at the Masters, he isn’t kidding.

“I’m not sure I’ve ever done this in my career, but once we were done for the week in 2017, I actually pulled [Mike McQuade] to the side, and I thanked him again for trusting me to be a part of that broadcast,” Eaves said. “That means a lot to me personally, let alone professionally, and I thanked Mike for that.”

Reverence is not all that makes Eaves a simple choice to replace Rinaldi in post-round settings. He is a gifted interviewer, instinctually relatable personality and self-anointed “golf enthusiast” (according to his own social media), to say nothing of his near-encyclopedic knowledge of Augusta National.

Even if he’s only been to a handful of Masters, his brain has traversed the event hundreds of times.

“My entire life I’ve known every hole on the golf course, and pretty much every shot on the golf course,” he said. “But when I went there, the one thing I wanted to do: I wanted to feel it. I want to feel how steep that slope was going down No. 2 fairway, No. 10 or walking up No. 8. I wanted to see just how narrow that 12th green looks from the tee box. I wanted to feel all those things to put everything into perspective for what I saw on television and what I imagined. To actually walk those fairways, it really tied it all together.”

Golf fans will see plenty of Eaves over the next two weeks between his SportsCenter duties and the interview room for ESPN’s Thursday and Friday coverage from Augusta National. Eaves hopes they can also see that even for a veteran sportscaster, the Masters remains in a class of its own.

“It is one of the most appreciative moments of my career, and I’ve been fortunate to cover some really big events,” he said. “The Masters has always been one of my favorite things as a fan. Going back to when I was a kid and watching a tournament every year with my dad and seeing how special that place was, the champions that have come from there. Every year I go down there, I know it’s a blessing for my career to be able to have that opportunity, and I look forward to it each and every year.”