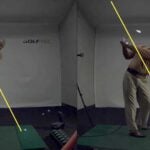 Get your arms deeper and more around you on the backswing.

Coming over the top and hitting a wicked slice has been plaguing recreational golfers’ scorecards for as long as the game has been played. For 90s shooters, it’s often the central issue preventing them from scores in the 80s: A recent study found that higher handicaps tend to miss short and to the right a whopping 70 percent of the time.

That was the issue James Parson was trying to solve when he visited his Virginia Beach-area GOLFTEC. His over-the-top move wasn’t as big of an issue with his short irons, but it wrecked havoc on his longer clubs.

“I wasn’t being consistent with my driver and long irons,” he said. “I didn’t know where the ball was going.”

Parson’s was an 18 handicap, with an average score around 97. Then his coach, GOLFTEC’s Joel Rouleau, spotted a common issue that slicers make in their swings: Parson was lifting his arms out in front of him on the backswing. The pair, instead, worked on hand path. They wanted his arms deeper and more around him, starting on the takeaway — illustrated below, with a line drawn up the shaft, and watching to make sure his hands stayed underneath it.

This had the added bonus of introducing more “turn” into his golf swing. That’s great for power, and one way to help hip turn instead of lift is to focus on straightening a trail leg on the backswing.

The two tweaks worked in tandem to get his arms more back and around him, which helps golfers deliver the club back into the ball with a more inside-to-out path.

Practicing that move improved his ability to hit his long irons and driver. Now, he’s down to a 12 handicap, with an average score at 90 — and trending into the high 80s.

“Now I can stand over a 5-iron or driver and have conference that I can keep the ball in play,” Parson says. “The biggest plus is that training this move gave me the tools to keep improving, because I know what’s going wrong. “