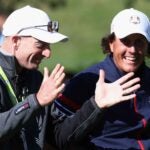 Jim Furyk and Phil Mickelson at the 2018 Ryder Cup.

The significance, or lack thereof, of Ryder Cup captains is one of golf’s great debates. Heck, entire books have been written on the topic. (If you’re keen, we point you to The Captain Myth: The Ryder Cup and Sport’s Great Leadership Delusion, by Richard Gillis.) No one can argue that the captains and their lieutenants don’t lack for duties — they pick players and shirt styles, set pairings and menus — but less clear is what actual impact they have on the result of the matches.

Yes, captains can help get their players get in the right frame of mind to play high-pressure golf in front of tens of thousands of roaring fans, but ultimately it’s up to the players to execute.

Earlier this week Phil Mickelson was asked to muse on the role of Ryder Cup vice-captain, a position he’ll assume for the first time at Whistling Straits next week. He responded with a story about Fred Couples, who is also serving on the 2021 squad as a vice-captain under Steve Stricker.

“I remember on the 18th hole at Memorial, the Presidents Cup in 2013, coming down the last match, we’re tied,” Mickelson said, referring to his and Keegan Bradley’s Saturday foursomes match against Jason Day and Graham DeLaet. “[Keegan] is up ahead of me walking with Captain Couples and I hit one in there about 12 feet.

“Keegan, you could see him just kind of breathe again, knocks that putt in. Graham DeLaet holed a chip shot right in front of him, Keegan knocks it right on top of him for a tie. There’s been a lot of great captains, but that’s an example of one thing where a captain can make a difference on a player’s emotional state.”

As for Mickelson’s role next week? Knowing Phil, you have to figure he’ll be active, from the Ping-Pong table to pep talks in decisive moments. On Sunday and Monday, he joined most of the U.S. squad in Kohler, Wisc., so the players could get familiar with the course.

“It’s fun to hang with the guys and to have that time together, but also to be able to now prepare for a week knowing what to expect, who you’re going to play with, golf balls, if you might change,” he said. “You have a week to get ready.”

And then it’s all up the players … and the captains?