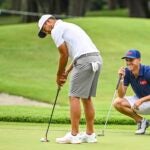 Xander Schauffele and Justin Thomas are representing Team USA at this year's Olympics.

Up to this point the focus on the Olympic men’s golf competition has focused on who won’t be in attendance. Some opted out, like Dustin Johnson or Louis Oosthuizen. Others ran into Covid-positive tests, like Jon Rahm and Bryson DeChambeau. Phil Mickelson and Jordan Spieth didn’t finish high enough in the U.S. rankings. Tiger Woods is injured. Brooks Koepka passed on an alternate spot. You get the idea.

But now it’s time for the actual Olympics themselves, so no more moping allowed. Let’s focus on the gang in attendance at Kasumigaseki Country Club. Without further ado, here is the complete field, ranked according to MGM’s odds page, with exactly one sentence about each competitor.

Ranked by tiers, seven through one — one sentence per golfer.

TIER 7: DIAL UP THAT WIKIPEDIA PAGE!

Mane plays most of his golf on the Tata Steel Professional Golf Tour of India, where he has won five times since the tour got world-ranking sanctioned in 2019.

Lieser was the first Czech golfer to ever win on the European Tour and breaks the golf mold by competing in glasses and no hat.

Pagunsan got plenty of attention when he qualified for the Open Championship with just 11 clubs in his bag — but there was far less fanfare when he skipped the Open to prep for the Olympics instead.

Charoenkul has put together a solid career across Asia for the better part of a decade but doesn’t enter the Games in his top form; in 10 Japan Golf Tour starts this year he has just a single top-20 finish.

Not to be confused with the clothing company Galvin Green, nor with his brother, Galven Green, Gavin Green was an eight-time winner and three-time All-American at the University of New Mexico.

Asked why he didn’t become a ski jumper like his father, Johannessen had a simple explanation: “Yeah, I’m just too fat.”

Long owns a decent claim to fame: He’s the course record-holder at Pebble Beach, where he shot a second-round 61 at the Carmel Cup in 2017, competing for Texas Tech.

TIER 6: VAGUELY FAMILIAR FROM A LEADERBOARD…

Campos plays well on home turf, specifically the Puerto Rico Open, where he finished T8 in 2016, T10 in 2017 and T3 earlier this year.

Campillo, who replaced Jon Rahm last-minute, was listed as Spain’s top-ranked amateur for six different years before turning pro in 2010.

Valimaki, who is just 23, won four times on the Pro Golf Tour in 2019 and then won the 2020 Oman Open in his sixth-ever European Tour start.

In 2019 I made the case that Hansen could be the owner of the greatest shank in golf history:

Zanotti was among golf’s stars of the show at the Opening Ceremony, carrying the Paraguayan flag and wearing a splendid striped outfit:

Vincent is a five-time runner-up on the Asian Tour but has yet to get across the line for a victory — although he does have a win on the Abema TV Tour.

Paratore is one of the fastest professional golfers anywhere.

The two best European Tour events of Kieffer’s career came in back-to-back weeks earlier this year, when he lost in a playoff to John Catlin and finished second to Garrick Higgo at the Austrian Golf Open and the Gran Canaria Lopesan Open.

Samooja is a lesson in persistence; he first competed in European Tour Q-School in 2008 and finally played his rookie year in 2019.

Sabbatini was born in South Africa but in 2019 changed his official country of residence to Slovakia, the home country of his wife Martina Stofanikova, helping his qualification for the Olympics and instantly becoming the most accomplished Slovakian golfer in history.

Langasque won the British Amateur in 2015, earning him entry to the 2016 Masters, where he tied the amateur back-nine record with a five-under 31.

There’s an entire section of the website for Golf Moia, Arnaus’ home course in Spain, dedicated to the accomplishments of its most successful golfing product entitled “Discover the field where I grew.”

Straka became the first Austrian golfer to earn a PGA Tour card after a successful campaign on the Web.com (now Korn Ferry) Tour in 2018.

Yuan and his wife Ying Luo each attended the University of Washington before turning pro; Luo last played on the LPGA Tour in 2019.

Rasmus has ascended to the world’s top levels but his twin brother Nicolai has aspirations of joining him there; Nicolai is No. 404 in the world and currently No. 110 in the Race to Dubai.

Pan’s lone PGA Tour victory came at the RBC Heritage in 2019; he’s currently battling to make the FedEx Cup Playoffs, where he ranks No. 116.

Lahiri has taken advantage of re-earning his PGA Tour card at Korn Ferry Finals in 2019; he’s No. 115 in the FedEx Cup this season on the back of three top-six finishes.

Fox is the son of professional rugby player Grant Fox, who won the inaugural Rugby World Cup in 1987 playing for the All Blacks, and the grandson of New Zealand star cricketer Merv Wallace.

Schwab is familiar with bronze medals; he finished T-3 in both the 2016 and 2017 NCAA National Championships.

Janewattananond’s nickname comes from his father, a Thai judge, who is a big fan of jazz music.

Hoshino will hit the opening tee shot of this year’s Olympics and said he was nervous based off the 1st fairway, which he described as “very narrow.”

Norlander went to Augusta State for college and currently belongs to Augusta Country Club, which is adjacent Augusta National.

Rozner won this year’s Qatar Masters but largely introduced himself to an American audience when he took down Bryson DeChambeau in the first match of the WGC-Dell Match Play some two weeks later.

Pereira earned an instant “battlefield promotion” from the Korn Ferry Tour when he claimed his third victory of the KFT season — and hasn’t looked back with two top-six finishes in his first four PGA Tour starts.

It’s been all or nothing for Detry of late, going T2-MC-MC-T2-MC in his last five starts.

Munoz’ first three professional wins all came in Colombia: Two on PGA Tour Latinoamerica’s Developmental Series in 2015 and then, playing on a sponsor’s exemption, he won the Web.com’s Club Colombia Championship in early 2016.

Pieters is a four-time European Tour winner and one of the world’s foremost experts on club-snapping.

Hughes is trending up after a T14 at the Rocket Mortgage Classic and a T6 in his last start at the Open Championship.

Ortiz is all in on adapting a team/country format for the Olympics: “I think the format can definitely be better and I think that would engage the country to be more involved and make it more about the country, not individual,” he said on Tuesday.

Vegas, a three-time PGA Tour winner, became the first Venezuelan golfer to play on the Presidents Cup in 2017.

Migliozzi went on a summer heater with back-to-back runner-up finishes on the European Tour before capturing hearts and minds with a T4 at the U.S. Open…

…but nobody has been on a summer heater like Higgo, who won twice in three starts in Europe and then won in his second-ever PGA Tour start at Congaree.

At 17, Kim was the youngest player to make it through PGA Tour Q-School when he finished T20 in 2012, and in 2017 he became the youngest-ever Players Championship winner.

Leishman shot three under on the back nine Friday of the Open Championship while putting with his sand wedge, missing the cut by just one shot.

Bezuidenhout has been consistent but not quite at the top of his game of late; in his most recent 10 starts he has made every cut but hasn’t finished better than T23.

Fleetwood’s World Ranking peaked in 2018, when he ascended to No. 9 thanks to a run of incredible consistency and a series of wins on the European Tour.

Im and Stewart Cink, who are neighbors in Atlanta, are the only two players to be named Korn Ferry Tour Player of the Year and PGA Tour Rookie of the Year in back-to-back seasons.

Lowry is on a strong run of form with four made cuts at major championships this year including a T4 at the PGA and a T12 defending his Open Championship title.

Niemann has racked up three runner-up finishes on the PGA Tour this season as he chases his second title, including a T2 at the Rocket Mortgage Classic.

Conners has developed into one of the Tour’s steadiest ball-strikers, making the cut in 21 of his last 23 PGA Tour starts.

Because of a last-minute addition to the field and a wild travel and testing schedule, Reed is unlikely to get any sort of on-course practice before he steps on the 1st tee Thursday.

Casey was among this year’s best major championship players, finishing T26-T4-T7-T15 at the season’s marquee events.

McIlroy, who is from Northern Ireland, faced a tricky decision in picking a national Olympic identity between Great Britain and Ireland.

Hovland’s Norwegian Olympic teammate said he admires the way, “Off the course, I like the way Viktor just doesn’t give a s— about anything other than what’s best for him and I can definitely learn from that.”

Matsuyama is competing in his home country as the reigning Masters champion and will face more national pressure than any other golfer in the field.

Thomas has been hitting the gym hard in advance of this week’s games.

Schauffele described the precarious nature of this year’s Olympic Games with particular empathy:

“Man, if you’re sort of in your last leg and let’s say you’re a swimmer from any country and you’re getting to that age and this is your last run and you’ve been preparing for the last three to four years just to compete and you get COVID and you can’t play, I have so much sympathy and empathy for the situation. I can’t even explain it. I would feel really bad and there’s just no way to make it up to the individual because this is the pinnacle for so many other sports.”

Morikawa enters this week as the Champion Golfer of the Year, the world No. 3 and the undisputed tournament favorite.

Where to bet the men’s Olympic golf tournament