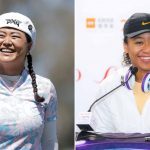 Christina Kim (left) says she can relate with Naomi Osaka.

SAN FRANCISCO — Mental health and media coverage have long been intertwined, but after tennis star Naomi Osaka’s withdrawal from the French Open earlier this week, the issue has once again been pushed to the fore.

Should athletes feel obligated to talk to the media, even at the expense of their mental health? Are compulsory press conferences fair to them? Or are athletes alienating themselves, and their stories, from fans by opting out?

The questions go on and on.

This is all familiar territory for Christina Kim, the 37-year-old three-time winner on the LPGA Tour. She’s been in the public eye since she was 15 and has had her own mental-health struggles. In 2012, she posted a personal blog titled “I guess it’s time to address the elephant in the room,” which detailed her battle with depression. She later shared her tale with Golf Digest.

Kim is far from an introvert — there may be no one in golf as spirited as her — but that doesn’t mean she can’t understand what Osaka has been going through. Kim is well aware of the challenges others may confront in settings in which she thrives.

Kim is of the belief that the gap between athletes and the media can be bridged with better communication. Remembering that athletes are human — as well as athletes remembering that press members are human — can alleviate some of the tensions that arise, Kim said. With this humanization on both sides of the aisle, she added, trust can be established, which allows players to worry less about what they say being taken out of context or “gotcha” questions used for easy clickbait.

Race and gender, Kim said, can drive a divide between athletes and the media, because these differences can lead to misinterpretations between the two parties, ultimately souring the relationship. The key, she said, is remembering everyone is human.

That’s a lesson that has taken Kim years to learn. She said she has experienced media outlets misinterpreting her words and social media trolls in her mentions. As she’s grown though, those words, she said, have increasingly hurt less. Some might assume it’s maturity, and it is, but it’s more than just that.

“I’m at a point in my life now where if something negative is written or said about me, I think it says more about the person who wrote or said something than it does about me,” she said. “I’m at a place where I’ve found better ways to cope with it and have a better understanding of people.”

Coming to that place took time. Part of the reason Kim is able to now more easily brush off what she deems to be negative or unfair press (or fend off Twitter trolls) is because she’s in a better place with her mental-health struggles, which included, she said, an attempted suicide.

“I don’t want to make light of any of the things Naomi is going through,” Kim continued. “If you think that you want to emulate me where you can ‘just get over it,’ know that it does come at a cost.

“I stand in solidarity with Naomi.”