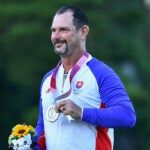 Rory Sabbatini with his silver medal Sunday evening in Japan.

KAWAGOE, Japan — If you want the honest truth from Rory Sabbatini, the podium was out of sight, out of mind. Frankly, it was outrageous. He was teeing off seven groups ahead of the leaders on Sunday of the Olympic golf competition, seven shots back of Xander Schauffele.

But before that first tee shot, there was the warmup session in which Sabbatini said he “couldn’t find the golf ball and the clubface to match them up at all.” He left the range altogether, ending his warmup earlier than normal. One of the worst warmups of his career, he said later.

He did win a silver medal, somehow, despite everyone and their brother being in contention for the podium Sunday afternoon at Kasumigaseki Country Club. On this gettable golf course, where we’d seen three 63s entering the final round, Sabbatini shot the round of the week: a 61 with 10 birdies, two bogeys and a hole-out eagle.

When I found the man on the 15th green, he was as cool as could be. Eight under for the day, he greeted KJ Choi on the 16th tee with “Hola Señor.” (Neither player is fluent in Spanish.) KJ laughed, and responded slowly, “I am very impressed with you.” Everyone else on the course was, too. How was that Rory shooting this round?

“Not bad for a grandpa, huh?” he replied. Things were going so well for Sabbatini that he cast away practice swings entirely. Perhaps conserving energy, given the 104-degree heat index.

Only that first swing on 16 was one of his worst swings of the day, warmup included. Not a second after contact he said, “Oh my god, Rory. Really?” The ball started right and ended right, short of the green side bunker and short-sided to the tricky hole location. When his par-saver stayed outside the jar, he stared up to the sky for an uncomfortable five seconds. Mackenzie Hughes didn’t know what to do, so he waited for Sabbatini to clear his mind before continuing.

“You got what you deserve,” he muttered to himself heading to the 17th tee. Then came another uncomfortable moment of reflection in which Sabbatini stepped away from the tee box and stared out over a fence bordering the property. Only a couple volunteers and four security guards were there to watch him. Twenty long seconds passed before he turned back to the tee, exhaling and starting anew. If he thought he had one foot on the podium through 15, he had to think he’d kicked himself off it on 16.

But that was the beauty of the Kasumigaseki setup Sunday. The 17th was drivable, and the 18th was difficult. You can birdie the first one, as Sabbatini did, but then you’ll be working hard for the second, which he also did. A blistered drive gave him 202 yards from the fairway, from which he stuck an approach to just 12 feet. Perhaps you’ve seen the putt by now. He knew it was in long before it dropped.

Now might be an appropriate time to mention his citizenship. That story has been told quite well. He was born in South Africa, but now speaks with a Southern twang after a career of pro golf in the States. Only recently did he earn Slovakian citizenship through his wife, who was there to watch the putt drop in Japan. Martina was Rory’s caddie, suffering through the extreme heat and expending what little energy she had left ensuring her husband kept his cool.

Still, the beating sun had taken it out of her, so much that Sabbatini even carried his own bag on the 10th hole Sunday. He’d grab extra clubs from his bag on the tee box — holding three or four in his hands as he walked — just to lighten her load. Sure, he was excited when the putt dropped, but Martina was ecstatic. “Yes, yes, yes!” she screamed. A sure-fire medal for her homeland, and for her hubby. Little did she know how stressful the next two hours would be, waiting to see if that silver might just turn into gold.

Of course, it didn’t, but that was no cause for frustration. Sabbatini left the range upset and gained 3.8 shots on the field on approaches alone. He chased after the young guns with the mentality of a young gun — and he walked away with a silver medal.

“I thought I was so far out of it I didn’t have any expectations,” Sabbatini said, medal hanging from his neck. “So I just kind of went back to how I used to be when I was in my 20s and played aggressive golf.”