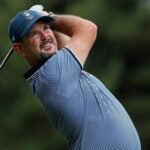 Rory Sabbatini is representing Slovakia at the 2020 Olympics.

As the general secretary of the Slovak Golf Association, Kamil Balga has had to answer his share of questions about why Rory Sabbatini — native son of South Africa turned South Floridian — is representing Slovakia in the Summer Olympics men’s golf event this week.

The queries about Sabbatini’s new nationality started coming in late 2018 when the six-time PGA Tour winner and former top-10 player in the world announced that he had acquired Slovakia citizenship by way of his marriage to a Slovak woman, Martina Stofanikova.

Several months later, at the Open Championship at Royal Portrush, Balga found himself in a conversation with a high-ranking R&A official.

“Tell me the story about Rory and Slovakia — it’s brilliant,” said the official, who had heard snippets through the grapevine. “Tell me the details!”

To which Balga replied, “No one would expect that Rory would marry a lady from Slovakia. That was just the beginning.”

Here’s the rest of the story: Stofanikova’s cousin, Rastislav Antal, was then vice-president of the Slovak Golf Association (earlier this year, he was elected president). In Sabbatini, Antal saw great value. If Sabbatini were to play under the Slovak flag, his golf celebrity would go a long way toward promoting the game in Slovakia, a nation with only 9,000 registered golfers and 26 courses.

Antal took his vision to Sabbatini, who responded positively. In particular, Sabbatini said he liked the idea of supporting junior golf initiatives in his wife and stepson’s homeland.

With Balga guiding him along, Sabbatini began the naturalization process.

The plan also came with one other significant benefit to both Slovak golf and Sabbatini himself: becoming a Slovakia citizen would more than likely allow Sabbatini to compete in the 2020 Summer Olympics, an opportunity he would not have had if had tried to qualify as a South African, because of much stiffer competition.

Some wondered whether an Olympic bid was the real motivation for Sabbatini’s newfound loyalty to Slovakia. Sabbatini was quick to rebuff the notion, saying in early 2019 that “this decision was made to support my wife and stepson and to open the door for golf development in Slovakia. I didn’t even know I would be eligible.”

Sabbatini was, under a bylaw to Rule 41 of the Olympic Charter that permits athletes with dual citizenship to represent the nation of their choice.

Balga said he understands the skeptical view of Sabbatini’s naturalization.

“I get it,” he said in a phone interview from Slovakia earlier this week. “But that wasn’t the idea. The first idea was to help to bring a premium golfer to Slovakia to have the chance to show people that it’s a real sport, that golf is not just for a certain part of the society. We wanted Rory to be the face of golf in Slovakia, to get golf on TV screens, because then the rest of the society can see that golf isn’t just a walk on the course. It’s a real sport.”

As for how much national pride the Slovakian golf community has in Sabbatini, Balga said that depends on whom you ask.

“Some of the golfers are proud of having him on our national team, but, yeah, there are still some people who say, ‘He’s not Slovak.’”

In fairness to Sabbatini, he’s not stealing an Olympic bid from any of his fellow countrymen. Far from it. The next highest ranked Slovak golfer is Petr Valasek, who is 848th in the world (and that’s after winning a European mini-tour event in Poland a couple of weeks ago). Valasek was nowhere near sniffing a place in the field in Tokyo. For Slovak golf, it was Sabbatini or bust.

Sabbatini has been doing what he can to assimilate. He has been learning some Slovak phrases from his wife, and he visits Slovakia once or twice a year, often building trips around European Tour appearances, or even events in Slovakia itself; in 2019, Sabbatini won the Slovak Open Championship. Earlier this month, Sabbatini joined the 40 other Slovak athletes who are competing in the Tokyo Games — at 45, Sabbatini is the oldest — to take an Olympic oath in the presence of Slovak president Zuzana Caputova.

Sabbatini, who is ranked 204th in the world and has missed 11 cuts in 18 starts on the PGA Tour in 2021, is not among the favorites to medal in Tokyo. But Balga believes that the tournament is wide open, given the small field (60 players), no cut, muggy conditions and some players coming in underprepared to a course, at Kasumigaseki Country Club, with which they are unfamiliar. (Sabbatini arrived in Tokyo on July 21.) Who knows, maybe it will be Sabbatini’s week — and if it is, Balga has little doubt that all of Slovakia would embrace Sabbatini as their own.

“That would be marvelous,” Balga said. “He would be a hero.”

Or maybe Sabbatini can achieve that status without a medal.

Immediately after the Games, he is flying back to Slovakia, where he is scheduled to visit Trnaya Golf Club, about a 30-minute drive north of the capital city of Bratislava. Over the course of a three-and-a-half-hour clinic, Sabbatini will do what he pledged he would do when he was first granted citizenship: spread the gospel of the game to the next generation of Slovak golfers.