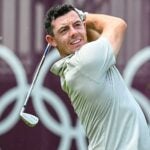 Rory McIlroy is primed for a run up the leaderboard in Round 2 at the Olympics.

The second round of the men’s golf competition at the Tokyo Olympics kicks off Thursday night for viewers in the United States. Here’s what you need to know to watch the second-round action on TV or online.

Previewing Round 2 of the Olympics men’s golf event

There’s a whole lot of golf left to be played, but with 18 holes behind us, here’s where the men’s Olympic golf competition stands. Austrian Sepp Straka fired an impressive eight-under 63 at Kasumigaseki Country Club to take a narrow one-shot lead over Thailand’s Jazz Janewattananond.

But plenty of star players put together solid enough rounds on Day 1 to give themselves a chance to contend this week, including Rory McIlroy and Collin Morikawa. McIlroy, the four-time major champ who is representing Ireland, and Morikawa, who recently captured his second major at the Open Championship, both shot two-under 69s on Thursday.

With prime scoring conditions expected to continue in the second round, either player could make a charge up the leaderboard. McIlroy and Morikawa begin Round 2 at 7:25 p.m. ET on Thursday alongside Sungjae Im. Below you will find everything you need to watch the second round.

How to watch Olympic Men’s Round 2 on TV

Golf Channel will air the second round of the Tokyo Olympics men’s golf competition beginning at 6:30 p.m. ET Thursday night and finishing at 3 a.m. ET Friday morning. You can watch replays of the Round 2 action on Golf Channel Friday at 7 a.m. ET and 2 p.m. ET.

How to stream Olympic Men’s Round 2 online

You can stream the second round Golf Channel TV coverage of the Tokyo Olympics men’s golf competition on NBCOlympics.com and golfchannel.com. Olympics highlights, documentaries and commentary can be found all day long on Peacock.

How to bet on the Olympics