2021 CJ Cup live coverage: How to watch Round 1 on Thursday 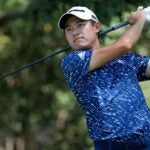 Collin Morikawa is making his first start of the season this week at the CJ Cup.

The 2021 CJ Cup at the Summit Club gets underway on Thursday with the opening round in Las Vegas. Here’s what you need to know to watch the first-round action on TV or online.

Few PGA Tour players had a better year in 2021 than Collin Morikawa. The 24-year-old phenom won the Open Championship in July in his first-ever appearance in the event. That followed his victory at the 2020 PGA Championship, which was also his debut. Throw in his win at the WGC-Workday in February and you have a near-Hall of Fame resume built in under a year.

This week’s CJ Cup will be Morikawa’s first start of the new 2021-22 PGA Tour season, but golf fans have seen him on the course recently. Morikawa was a rookie on the victorious 2021 U.S. Ryder Cup team, and a successful one at that. He’s in good company this week at The Summit Club, as several other Ryder Cup will also tee it up.

The World No. 3 will begin his opening round in Las Vegas on Thursday at 12;13 p.m. ET alongside Sungjae Im and Hideki Matsuyama. Below you will find everything you need to watch the first round of the 2021 CJ Cup on Thursday.

How to watch CJ Cup Round 1 on TV

Golf Channel will carry the opening round of the 2021 CJ Cup with three hours of coverage on Thursday from 5-8 p.m. ET.

How to stream CJ Cup Round 1 online

You can stream the opening round Golf Channel TV coverage of the CJ Cup on golfchannel.com. Fans can also view Featured Group coverage of Round 1 on Thursday via PGA Tour Live with a subscription.