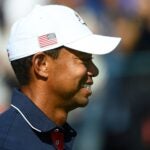 Tiger Woods is tuning into this year's Ryder Cup from home.

HAVEN, Wis. — We won’t see Tiger Woods at Whistling Straits this week. But according to a few key members of Team USA, he’s making his presence felt anyway.

“Probably not going to happen,” Stricker said when asked about rumors of a surprise Woods appearance. “He’s been obviously in my ear a lot and I call him pretty regularly. He’s part of our Ryder Cup team. He’s part of what we do. He’s been part of so many of these teams.”

Stricker added that Woods didn’t want to be a distraction, knowing the scrutiny that would follow what would be his first public appearance in months. But several players went to visit Woods in advance of the event, both to check in on his well-being and talk Ryder Cup.

“I think it’s just not a good time for him to be here physically because of where he’s at in his rehabilitation and tough course to walk, right? Everybody is going to see it: from tee-to-green, it’s difficult,” Stricker said.

On Thursday night, Ryder Cup Eve, Stricker read his team a text Woods had sent. It seemed to have left an impression.

“We had a nice message from Tiger last night, and obviously not going to reveal what it said, but Pat and I know,” Xander Schauffele said after winning his morning match 5 and 3. “We referred to it a few times today, and we knew what we needed to do.

“We knew he was fist pumping from the couch. Whether he’s on crutches or not, he’s as fired up as anyone back at home. So it’s nice to have his support.”

Cantlay, who partnered with Schauffele in that 5 and 3 win, said he was among the players who’d been to see Woods in the lead-up to the event.

“No better role model and no better leader, and just somebody that you can always learn from,” Cantlay said. “So I saw him last week at home, and just picked his brain on Ryder Cup and applied some of that here today.”

And Justin Thomas, who is among Woods’ closest friends on Tour, said he went to visit a couple times last week.

“I think people would be surprised — obviously you all saw in Australia [at the Presidents Cup] how much it meant to him, but just the amount of work and the amount of hours he’s willing to spend to make sure that he feels like the team is prepared and as ready to go as possible is pretty cool.”