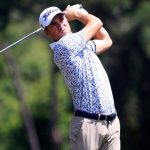 Justin Thomas was a ball-striking machine at the Valspar Championship.

Justin Thomas was a ball-striking machine at the Valspar Championship last week. The 14-time PGA Tour winner ranked No. 1 in SG: Off the Tee, SG: Tee to Green and SG: Approach as he finished T13 at Innisbrook, and he credited his success to a distinct feeling in his swing.

“I feel like I can kind of lay it off at the top and try to hit pull cuts,” Thomas said. “That’s what really was my thought at The Players, I’ve had a lot of good ball striking rounds doing that.”

With Thomas playing with his hands so high at the top of his backswing, laying off the club to get it shallowed out is key for him to get his club working down the correct path. When he can get that feeling, it allows him to play his preferred ball flight and control the ball as it comes off the clubface.

Now all that’s left is to iron out the putting.

“My good shots are really, really good right now and the consistency is there,” he said. “I just need to see a couple putts fall.”

Sam Burns is the latest winner on the PGA Tour, but back in his youth, his family was hoping his path would be on the football field. Coming from lineage heavily influenced on the gridiron (his brother and father played collegiately), Burns played football growing up. But by eighth grade, he knew his future was in golf.

“[My Mom] was just devastated,” Burns said. “That was all she ever knew was going Friday night watching football.”

So, he struck up a deal. Burns would play one more year of football on one condition: the family would install a putting green in the backyard.

The trade paid off. Burns played his last season of football with a putting green waiting for him when he got home. He then went on to compete for the LSU Tigers golf team where he won the Jack Nicklaus award during his sophomore season. And it was all spring boarded by football.

“That was good negotiating on my part,” he said.