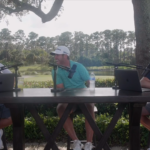 GOLF's Subpar: Matthew Wolff breaks down his trash-talk game and why veteran Tour players have an advantage 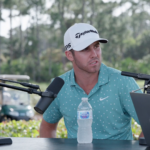 GOLF's Subpar: Matthew Wolff talks what Tour players he looked up to as an aspiring pro

In an opening round in which large chunks of the field — including the likes of 62-year-old Larry Mize and 63-year-old Bernhard Langer — carded scores deep in the red, McIlroy struggled to stay afloat.

Rory’s brutal opening 18 came to a head as he stepped to the tee on the 13th. A scoring opportunity beckoned on the long, dogleg par-5. If McIlroy could put his ball in the fairway, he’d be in perfect position to card a birdie, and perhaps turn the tide of his round.

“Oh — oh wow,” Faldo said. “That’s serious. That would be lost. That’s gone unless it gets some crazy kick.”

Rory hit a provisional that found the fairway, but began a search for his original ball DEEP in the trees to the left.

“He’s coming quickly up on the three-minute mark to find this golf ball,” Pepper said.

Then, a stroke of good luck. Rory found his ball, but ESPN’s microphones picked up his dilemma.

McIlroy had to take an unplayable from his ball’s original location, but before taking his drop, he wanted to consult a rules official.

A few seconds later, an official and a green jacket-clad Augusta National member appeared through the trees. After a short conversation, McIlroy found a proper location to drop and punched his approach into the fairway.

As the group trekked back toward the fairway, Rory couldn’t help but laugh.

“Yes, thank you,” he told the member. “Sorry for getting your nice green jacket dirty.”

“Ah, no problem,” the member replied.

McIlroy and his caddie then appeared through the dogwoods, and then began to navigate their way onto the proper side of Rae’s Creek.

“Come out covered in pollen,” Faldo said. “It’s not your day when you can’t even walk back to the fairway.”

Rory would make bogey on the 13th en route to a three-over, opening-round 75, leaving him 10 strokes off the lead. But hey, at least he did it with a sense of humor.