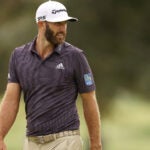 Dustin Johnson didn't do much of anything during his 11-day quarantine in a hotel room.

If you stop thinking of Dustin Johnson as a very talented golfer and admit that he’s one of the sports world’s great zen masters, things start to make a little bit more sense.

Consider the events of the past three weeks. Johnson, the world’s No. 1 golfer, tested positive for the coronavirus in Las Vegas on Oct. 11. He withdrew from the CJ Cup and also withdrew from the world, settling in the confines of a hotel room — where he stayed for the next 11 days.

“I didn’t leave the room for 11 days,” he said at a Wednesday media session in advance of this week’s Houston Open. Tiger Woods was raised a Buddhist; he’d no doubt appreciate Johnson’s enlightenment. “I was just laying around — kind of doing nothing.”

You’ve seen the fads that have appeared since March. How to work out from your home. Stay fit inside! Keep your mind sharp in quarantine! Dustin Johnson’s mindset: Why bother? It’s not clear he even contemplated a single sit-up.

“The most movement I made was to the shower,” he said, which, kudos to him on the personal hygiene. “And then I had a little outside area, so I would go sit outside for a little bit. That was it.”

Gear up like Dustin Johnson in our Pro Shop

Consider the panic another elite athlete might feel stuck in a hotel room for the better part of a fortnight in the immediate lead-up to the biggest event of the year (Johnson is among the favorites at next week’s Masters). The unrealized gains. The unpracticed swings. The unsharpened mind.

Even Adam Scott, one of the game’s zen souls himself, got a putting mat and some toys from Scotty Cameron during his own six-day hotel-room quarantine. Not Johnson. He spent his time tackling, according to him, every TV show the internet had to offer.

“There’s probably isn’t one you can name that I didn’t watch, I don’t think. I ran through all of them,” he said. “Yellowstone” is his favorite at the moment, which we already knew, because that’s the same show he queued up after winning at TPC Boston in August.

“I had some food, I was watching the iPad and I was looking at the book for this week,” he said of the celebratory plane ride at the time. “I caught up on an episode of Yellowstone and then I watched an episode of Deadliest Catch.”

Yellowstone. In sickness and in health.

Across sports, pros try hard to give off the impression that they’re too cool for school, that they don’t try hard, that their jocky swagger is wholly effortless. For Johnson, that’s just his real life. There’s not a try-hard bone in his body. Another example: Asked about his spot at world No. 1 later in the same presser, Johnson shrugged it off.

“I mean, I don’t know, to me (No. 1) isn’t really any different than any other number,” he said. “Yeah, it’s a ranking, but for me it doesn’t really feel any different.”

His peers admire his approach. Seriously, they do. They way he simplifies the game. The way he rebounds from any potential pitfalls. And of course, the way he plays, too. Which is why they’ll expect him to recover no worse for wear, ready to take on next week’s Masters as a deserving favorite to contend.

“If there’s anyone who can dust off a change and move on, it seems to be DJ,” Scott said. “The way he plays golf, very little fazes him out there. Problems on the golf course don’t seem to faze him and he bounces back quick.”

You can’t stay down if you never get down, and Johnson doesn’t seem to get down. Nor does he bring anyone else down. Watch Johnson for long enough and you’ll realize that he never has a negative word to say about anyone. You can see it in the way Johnson walks: This is a man who knows he’s great but isn’t particularly impressed by that greatness. He rolls with the punches, makes the most of his opportunities, moves on when things don’t go his way. That’s pretty cool.

Johnson also deserves praise for his fastidiousness when it comes to his quarantining process. He didn’t abuse his celebrity to ask for special treatment and he made no complaints about undergoing the same process that millions of Americans have in recent months. He put his head down, kept it glued to his iPad and emerged, 11 days later, ready to gear up for the Masters.

I’ll leave you with Johnson’s big-picture outlook. File this one away; it’s a perfect first-tee mantra. Say it to yourself before every round. Accept whatever happens next.

“My health is good,” Johnson said. “The state of my game is … undetermined.”