Rory McIlroy, Brooks Koepka among those who came near Covid-19 player 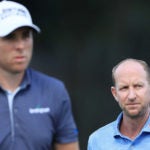 Luke List, left, and Vaughn Taylor played the first round with Nick Watney.

Rory McIlroy looked down at his phone. He had just completed his second round at the RBC Heritage in Hilton Head, S.C. He had a text from Nick Watney.

Soon after, Watney learned that he was the PGA Tour golfer to test positive for Covid-19.

“He was just saying, look, I hope I didn’t get too close to you,” said McIlroy, the world’s top-ranked player. “He feels badly that he was here today at the golf course. I said, ‘Look, it’s fine. You never know.’ So I said to him, ‘If I was in your position, I probably would have been here, too. Look, at this point, you just have to concentrate on getting better and getting healthy.’

“But, yeah, look, it sucks for him especially. You know, if you contract it, that’s fine, but then it’s the fact that who have you come into contact with, and who you might have exposed and stuff. Look, we’re still in the middle of a pandemic. Until this thing’s over, we all just have to stay vigilant and keep your distance and wear our masks if we’re going out in public and keep washing our hands.”

Brooks Koepka teed off in the group ahead of McIlroy, at 12:54 p.m. on No. 1. He got to Harbour Town around the same time as Watney. He was right next to him in the parking lot.

With a hole left in his round, Koepka heard about Watney from Daniel Berger, one of Koepka’s playing partners.

“We’ve got to see what happens,” said Koepka, the world’s fourth-ranked player. “Hopefully — it’s unfortunate Nick got it, but at the same time, hopefully, it stays with just him and doesn’t spread because I think we’ll have a big issue on our hands if it keeps going as the weeks continue.”

Luke List and Vaughn Taylor played the first round with Watney. List shot a 2-under 69 on Thursday, Taylor a 4-under 67. They were told shortly before their 12:21 tee time just that Watney had withdrawn from the tournament.

They had heard just that he wasn’t feeling well.

After their first nine, List and Taylor heard about Watney from a PGA Tour official. He had tested negative for Covid-19 when he arrived in Hilton Head, but felt symptoms on Friday and was retested.

“Yeah, it was hard to concentrate out there for me, just thinking about different stuff, and I wasn’t playing my best anyway,” said List, who shot a 2-over 73. “So it was a little – it would be nice if they had an option you can kind of say if you want to know or not in a situation like that. I would definitely like to find out after the round next time.”

List, Vaughn and their caddies were to undergo tests themselves. Each said they were not feeling symptoms. Watney will quarantine for at least 10 days.

Taylor said after Friday’s round he felt “a little nervous, but I feel good.”

“I didn’t have any close contact with Nick yesterday,” said Taylor, who shot a 2-under 69. “We kept our space. We didn’t shake hands. Right after the round, I washed my hands. Nick never coughed or sneezed. So I feel comfortable.”

The Tour said in a release that 369 people – players, caddies and essential personnel – underwent on-site testing prior to the tournament. Zero tested positive. Zero tested positive the week before at the Charles Schwab Challenge, the Tour’s first tournament after a three-month hiatus due to the coronavirus.

“if you look at the statistics. I read a thing today that – look, by the end of the year, there’s going to be 200,000 deaths in the U.S. alone from Covid-19,” McIlroy said. “So to think that us on the PGA Tour, none of us were going to get it was very – I don’t think anyone thought that. I think the consensus was someone is going to get it at some point, and Nick’s the one that’s got it, and he’s self-isolating and doing what he has to do.

“Yeah, it’s a shame, but the show goes on. We’ve got 36 holes to play at this tournament.”