I shot 92 on the PGA Tour last week. Here’s why it won’t keep me down 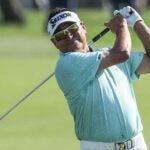 Robert Gamez has likely played his last competitive round at Bay Hill.

If you know what happened in my second round at Bay Hill last week, you probably were feeling sorry for me. You may have even felt pity.

Here I was, a longtime professional golfer, shooting a 20-over 92 — a 92! — in the second round of the Arnold Palmer Invitational, a tournament I won in 1990. How else could I feel but embarrassed, humiliated, ready to jump in the lake on 18 and never be heard from again?

Sorry to disappoint you but that wasn’t how I was feeling. Quite the opposite, actually. I was having a good time. Despite everything.

Yes, I hit some bad shots. OK, a lot of bad shots. In fact, it was the worst round I have ever played in competition and that goes back to my junior-golf days.

But I was playing the game I loved at my favorite golf course, with my wife, Denise, and plenty of friends in the gallery. The weather was sunny, with just a slight breeze. How could I not be smiling?

Especially given the fact that, if things had gone a little differently in 2014, I wouldn’t have made it this far. I underwent quadruple-bypass heart surgery which, as you can imagine, is a heck of a lot worse than quadruple-bogeys. Add on the problems I’ve had with my back and shoulder — I won’t bore you with the details — and I’m lucky to be playing golf anywhere, let alone on a championship course such as Bay Hill.

Even as one dispiriting shot lead to another last week, I told myself I was not going to give up. I could have shot one hundred and ninety-two and I still would have hit every shot — and tried my best on every shot.

Which was exactly what I did. I just wasn’t able to execute. This was only my second tournament since last year’s event at Bay Hill. The other was the Cologuard Classic a few weeks earlier in Tucson, on the PGA Tour Champions, where I finished third to last.

I am sad about one thing, though: I’ll likely never get another chance to play Bay Hill in tournament competition.

You see, the Tour has a new rule that states in order for players to compete in a specific event — including past champions — they must maintain a scoring average no worse than three strokes higher than the field’s scoring average for the year. I found out in an email I received from the Tour on Tuesday, moments before I was to play a practice round, that this rule would apply to next year’s tournament.

Which meant, in all likelihood, I was about to play in my last event at Bay Hill after 32 consecutive starts there. Talk about putting the pressure on.

I proceeded to shoot 79 on the first day, which included a 35-foot birdie putt on 18. Then came the 92. I missed the cut by a mile and declined to sign my scorecard. Why? Easy. I didn’t want the Tour to use that score against me. Yes, my first-round 79 will put me way over the scoring-average limit to earn an invitation back to Bay Hill in 2022, but I didn’t want my average to be any higher than that. I guess it was a protest of sorts, a futile attempt to keep my invite to a tournament I deeply love.

Bay Hill, where I am a member, means the world to me, and not just because I won there. It’s because of how I won there, by holing that memorable 176-yard 7-iron on the final hole for an eagle to beat Greg Norman and Larry Mize. I was 21 years old and a rookie at the time. It was the second of my three Tour victories. Two came in 1990, the other in 2005.

I don’t think much about the miracle shot during tournament week, but when I’m with friends, it comes up quite a bit. I don’t mind. I’m honored to be part of the history of a tournament that has Mr. Palmer’s name attached.

Take the first hole last Friday. I killed my drive. But when I got to my ball and saw the nearby scoreboard, I learned it had traveled only 245 yards. One of my playing partners outdrove me by 55 yards! I usually hit it these days about 260, maybe 265. Bay Hill is a long course. I just didn’t have the speed I need in my swing, and my putting needs a lot of work.

Yet, as I didn’t give up last Friday, I’m not going to give up on my future. My goal is to play in as many events as I can on the PGA Tour Champions. I’m busy writing for sponsor exemptions, but if I don’t get them, I’ll be out there trying to qualify.

The 92 does not define me as a golfer and it won’t define me in my life going forward.

It was simply one round of golf, nothing more. I was doing something I loved. That’s all you can ask for in life.