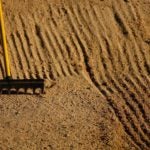 Who knew bunker rakes would be such a controversial topic.

DUBLIN, Ohio — Jack Nicklaus has certain themes. One of them is that traps (I hope you’re sitting) should be penal. He does not like hearing players say to airborne balls, “Get in the bunker!” In 2006, he had the bunkers on his grand course here, Muirfield Village, raked with furrows, an old Oakmont look, little lines of grooved sand. The players were not amused.

Well, these are different times, and bunker maintenance is one of golf’s red-hot subjects. Earlier this week, I wrote a piece that mentioned two good golf courses that do not have bunkers rakes. One is Pine Valley, in southern New Jersey. There’s never been bunker rakes there. The other was the village-owned course in Bellport, on the South Shore of Long Island. Bellport, like many courses around the world now, is going rake-free in deference to the pandemic. One less thing to spread the virus.

The response to the piece was overwhelming. I received several emails that said they support my position, that golf would be improved with the complete elimination of bunker rakes.

Colin Sheehan, the Yale golf coach, wrote and said that he had made a study of more than 1,500 scorecards from before World War II, and not one of them has a reference to a rake. Many reminders to smooth footprints, and presumably divots, but not one to a rake. You cannot find a single photograph of Bobby Jones ever raking his own trap.

One sample, courtesy of Coach Sheehan: “Level Footprints in Bunkers.” Any sidewinder soccer-style kick will do.

Several readers noted that rake-free golf is faster. One of my pressroom colleagues is in favor of going rake-free while noting that course conditions would be fairer for early-day players than those who come later. Well, Tiger Woods had a broad response for that issue, which I will get to in due course.

Gary Purdum of the Country Club of Landfall in Wilmington, N.C., wrote to say that “if we want to go to no rakes, I think we need to rethink the type of sand we put in bunkers. We’d need heavy coarse stuff that packs well, not bright, white, fluffy powder.”

I just looked up the Country Club of Landfall in Wilmington, N.C., Michael Jordan’s hometown. Forty-five holes! Sounds like a full morning for Mike. Looks like a rake-place, though. Perfect traps are part of country-club living.

This movement, need I realize, is a jumpstart. You probably have seen the bumper sticker that reads, “I’d Rather Be Driving a Titleist.” That’s fun. But check this out: “Stop the Over-manicuring of Golf Traps Now.”

I realize that this movement is going to need some high-profile help to get it off the ground. Imagine, if you will, Tiger and Rory, to cite two good bunker players, joining the cause.

I asked Tiger if he could imagine a world without rakes in traps.

“I don’t know,” he said. In the pandemic, he said, “at my home course, up at Medalist, if the guys happen to be in a footprint or a previous hole explosion that one of the groups ahead of them had been in, we just kick it over and move it out of there and move on and play. Whether that works at the elite level, I don’t know. What would [no rakes] be like for golf course maintenance? What would it be like for we [Tour] players versus players like you who play the game? We’re used to raking the bunkers. It would be very different.”

In an effort to get Rory in the mood, I asked him if he had ever played golf as a kid on courses without rakes. I have played Scottish courses where bunkers are bunkers. Like at Brora, near Dornoch, you can see sheep taking a break from the wind by hiding out in the bunkers on the course. The bunkers and the sheep were there before the first golfers were.

“As a kid I never played a golf course without rakes,” Rory said. “At my home golf course, in Holywood, it was very important to replace your divots, fix your pitch marks, rake bunkers, show good etiquette on the course. That was always sort of engrained in us.”

I was hanging on every word. The whole room was hushed.

“Playing golf in this day and age, with the little foam things in the cups and no rakes and stuff like that, if anything it probably speeds up play. If you’re in a foot mark you just take it out and you splash out. If anything it probably makes recreational golf a little quicker, which I’m all for. So yeah, look, extraordinary times call for somewhat extraordinary measures in golf, and if that means no rakes and not touching the flagstick, then I’m cool with that.”

I went for it: would you, Rory McIlroy, be willing to join the movement, to stop the madness, to send golf’s many rakes to gardeners all over the world?

“No,” Rory said “No, I would not. You’re barking up the wrong tree here with that one.”

OK, he will require some work.

Some have noted that rakes make golf fairer and not having rakes in traps would make golf less fair. Your ball could wind up in a hoofprint, in a heavy-footed footprint.

Tiger addressed this most important subject head-on. I asked him if he viewed golf as being fundamentally fair or unfair.

I’m putting him down as on the fence.