Medalist members: Pro golfers have flocked to this Florida club 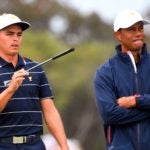 Rickie Fowler and Tiger Woods are just two of the many pros who call Medalist home.

The stage of this weekend’s The Match II between Tiger Woods, Phil Mickelson, Peyton Manning and Tom Brady will be Medalist Golf Club, one of the most popular joints for PGA Tour players to hold a membership at.

How did it get that way? Look no further than Tiger Woods. As GOLF.com’s Dylan Dethier wrote back in 2018, Woods moved from Orlando to Jupiter, Fla., near where Medalist is located, in 2011. At the time, there was not such a crowded constellation of the greatest Tour players in Jupiter. Sure, it was popular, but by no means the place you had to be.

In the years since, that has changed. Woods is joined at Medalist by his pal Rickie Fowler. Both Woods and Fowler grew up in southern California, but even Phil Mickelson has recently agreed that the Tour move is to move to southern Florida.

Fowler has famously won the men’s member-guest on at least one occasion at Medalist with his longtime agent Sam McNaughton. Other notable names in the member-guest competition: Michael Jordan (then a member in 2013) and his guest Keegan Bradley. Rory McIlroy was reportedly Jordan’s first choice, but McIlroy couldn’t make it work.

Medalist was designed in part by Greg Norman, another No. 1 player in the world, who was happy at the club for many years before feeling pushed out and quitting his membership. As recently as 2017, 22 PGA Tour and LPGA pros called the club their home.

In 2012, Brian Wacker compiled a list for PGATour.com of all the top pros who were members at Medalist. Among them were Adam Scott, Dustin Johnson, Marc Calcavecchia and Nick Price, to name just a few. Steve Marino and Olin Browne are two former Tour players who still call Medalist their home club.

To no surprise, it’s an attractive place for Tour pros to be, perhaps because the club has catered its vibe toward them. For one, the Palm Beach Post reported in 2013 that the club would waive its $50,000 initiation fee for Tour players. Suddenly it feels like an obvious place for pros to flock. (The Golf Life Agent now lists a Medalist membership with an initiation fee of $110,000.)