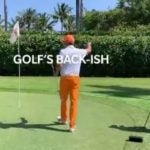 The sound of a golf ball coming to rest in the bottom of a cup was back.

The sound of hands coming together was not.

As professional golf returns in part with two charity events the next two weekends and then in full with the Charles Schwab Challenge on June 11, professional golf fans will not, one of several safety measures due to the coronavirus. No cheering, no hooting, no hollering until at least July.

While warming up for this weekend’s TaylorMade Driving Relief event, Rickie Fowler heard it quiet and clear during a Farmers Insurance ad.

Standing over about a 15-foot putt, Fowler takes his blade back, strikes his ball and watches it roll toward the cup before it drops. He lifts his putter slightly. Nothing. Fowler looks to his right.

The next shot in the video is of a speaker. His foot appears, then a hand, which turns it on.

While walking away, Fowler raises his right arm to acknowledge the cheers as the words “Golf’s Back” appear on the screen. It’s then adjusted to say, “Golf’s Back-ish.”

“No live crowds, no problem,” Fowler wrote under the ad shared on his social feeds on Friday.