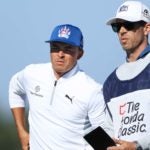 Joe Skovron has been on Rickie Fowler's bag since 2010.

With the PGA Tour — like many ventures — operating under a “new normal” they have tried to innovate the way they bring their product to fans. One of these innovations has been the mic’ing up of various players during the round, with hopes of capturing some of those intimate player-caddie conversations on the course. It has been hit or miss thus far, with many players being vocally opposed to wearing a mic during competition.

On this week’s episode of GOLF’s Subpar, Joe Skovron, caddie for Rickie Fowler, explained how things are different between he and Fowler when his player is wearing a mic.

“The mic is a little different between shots,” Skovron said. “You’re definitely conscious of conversations you’re having with other guys … We changed the conversations a little bit, I will say that.”

Skovron went on to explain that though they changed the in-between shots chatter, their conversations pre-shot were exactly the same. That’s where the value is to the broadcast, after all.

“I think that the conversations between the caddie and the player before the shot is what people want to hear, rather than what we’re talking about between shots,” Skovron said. “I think that that provides value to the broadcast, because you don’t always know what the process is and what you’re thinking about, why they’re hitting the shot. When you get to hear that, I think it adds a lot of value to the broadcast.”

He also said that with Fowler being so used to being in featured groups and having boom mics around, it’s not odd to have their conversations on the broadcast. Check out the entire episode of Subpar below as Skovron discusses how he got on Fowler’s bag, Ryder Cup roles and more.