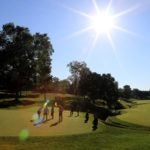 Pro-ams have been replaced by charity skins matches in recent weeks.

Wednesdays are a little different on the PGA Tour these days. With the Tour operating without fans, one of the favorite traditions of each week, pro-ams, has ceased to exist. The early-week events that allow amateurs (often affiliated with tournament partners) to play alongside stars have been shelved.

As with many things, though, the Tour has adapted to this pro-am-less world, and replaced the corporate hit and giggle with televised, nine-hole skins matches. The stakes are still low, but these friendly matches have provided quality entertainment in the lead up to the week’s event. As an added bonus, the matches being broadcast make them accessible to not only corporate sponsors, but also the casual fan at home.

The new format debuted two weeks ago at the Rocket Mortgage Classic; this week it returned at the Memorial Tournament. The Nationwide Challenge, benefitting Nationwide Children’s Hospital featured a pair of bombers in Tony Finau and Jon Rahm facing off with the technical duo of Ian Poulter and Graeme McDowell. Skins were worth $10,000 and all proceeds went to charity.

The games have an interesting, made-for-TV (the Match II comes to mind) feel to them, with players mic’d up and banter flying. Early reviews on the product have been positive — a rarity for a golf broadcast these days. In a sport where fans have been clamoring for more player conversations and less filler, broadcaster quips, these skins games are quickly becoming the gold standard. The announcers simply get out of the way and let the players carry the day.

With a lack of broadcast filler, fans get a glimpse into on-course conversations that they were never privy to before. Rahm shared with fans that his yardages might seem off, because he — being European — plays with metric yardages. Waltzing down one fairway, the group discussed if any player had achieved 200 mph ball speed in competition.

It’d be wise to take him seriously. The 30-year-old reached 206 mph in a casual round just last week. Even the stats nerds should come away from the broadcasts satisfied. Attack angle and spin rates were a hot topic of debate as well. And after a putt came up short early on, a tongue-in-cheek Poulter suggested Jack Nicklaus cut the greens before the tournament begins. If the greens stimp at a 16 tomorrow, you’ll know why.

Finau and Rahm came out on top in the skins game, winning $120,000 for their side, but the real winners are the charities these newly imagined Wednesdays benefit. One of the biggest concerns with the lack of fan-generated revenue for the Tour was their charitable partners, so it’s nice to see an innovative solution. And with fans getting a more intimate and authentic look at players, we can chalk it up as another W.

Someday things will go back to normal on Tour. Here’s to hoping Wednesday skins games are here to stay.