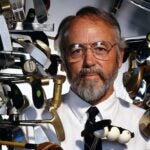 Frank Thomas, the former senior technical director of the United States Golf Association who was entrusted with safeguarding the integrity of the game throughout a period of propulsive innovation, died on Wednesday. He was 81 and had suffered a heart attack earlier in the week.

A native of South Africa who earned an engineering degree from Western Michigan University, Thomas was the USGA’s chief equipment regulator from 1974 to 2000. It was role that required a passion for the game but also an objective scientific eye, and Thomas had both the skills and disposition suited to that balancing act.

During his tenure, he oversaw the development of multiple landmark protocols and testing procedures, including regulations on everything from the shape of irons, woods and wedges to the trampoline-like effect of drivers. New methodologies for testing ball-flight came into being under Thomas’s watch, as did the USGA’s Slope system for rating courses, which helps ensure the accuracy of handicaps.

Thomas’s time at the USGA also saw the rise of fervid debates over technology and distance, the kind of hot-button topics that remain at the fore of the game today. Then, as now, some critics charged the governing body with being too lax in its regulations and letting equipment get out of hand.

Thomas himself did not escape such charges. That he and his colleagues also butted heads with equipment-makers — notably, in a $300 million lawsuit filed by Ping over the square grooves in the company’s Eye2 irons — underscored just how fine a line they often had to walk.

Even when he was taking heat, Thomas remained a widely respected figure, recognized for his intelligence, honesty and unwavering dedication to the game.

“Frank was such an important part of the USGA and the game,” Mike Davis, CEO of the USGA, said in a statement. He was “an innovator,” Davis added, but “…most importantly, he was a friend of so many in our game. He will be sorely missed.”

Before becoming an equipment watchdog, Thomas made a name as an equipment wunderkind. From 1966 to ’74, he served as chief design engineer for Shakespeare Sporting Goods Company, where he devised a filament winding technique for graphite fibers that gave rise to the first graphite shafts.

With his move to the USGA, Thomas went from pushing the equipment envelope to protecting the game from equipment gone too far. The job called for constant vigilance and required a thick skin. Not uncommon were the kind of conversations that buzzed through the game in 1995, shortly after Tiger Woods, playing as an amateur in his first Masters, ate up Augusta National’s par-5s in driver-mid-iron morsels. Calls for reining in equipment rang out far and wide.

That summer, in conjunction with USGA’s 100th birthday, Sports Illustrated ran an article in which prominent figures ranging from Nicklaus and Gary Player to the golf historian Herbert Warren Wind sounded the alarm over space-age advents in clubs and balls, and urged the governing body to take a more aggressive stance.

Thomas listened carefully to those pointed views, but also made it plain that he disagreed with them. There was little doubt, he noted, that the world’s best golfers could hit prodigious shots, but that didn’t mean the game itself was under siege. It was vital, he noted, to base decisions not on anecdotes but data.

“The people who are complaining love the game,” he responded in the article. “But I’m as concerned with protecting the game as they are. I express it by saying, ‘Before you make changes, make sure you know what you are doing.’ Right now, I’m very secure with where golf is. I don’t care how many players say there are hitting it 30 yards longer. Right now, there is no evidence that we have a problem.”

Exacting science was also at the heart of what was perhaps the most intense equipment dispute of the Thomas era: the Ping suit, which centered on minute measurements in groove design. (The matter was eventually settled out of court, with the USGA agreeing to further clarify its groove regulations and Ping agreeing to tweak its design moving forward.)

Thomas stepped down from his USGA post in 2000, but remained active in golf, with an expressed interest in promoting growth in the game and golfer enjoyment. He served as a Golf Channel analyst, a Golf Digest contributor and a judge on Golf Channel’s equipment-design contest, “Driver vs. Driver.” He also kept inventing, bringing forth an innovative mallet putter called the Frog Putter, while offering his services and insights through his official website.