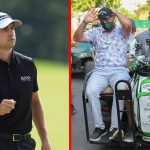 DUBLIN, Ohio — Thank goodness for the fans. Because if not for the few thousand in attendance on Sunday at Muirfield Village, there might not have been a single normal thing about Sunday at the Memorial Tournament.

Where did the weirdness begin? The 54-hole leader was absent from the stretch despite completing Saturday with a six-stroke lead. The atmosphere was buzzing with 17-year cicadas, which added a strange tone to the TV broadcast and, in real life, frequently swooped from the trees onto unsuspecting victims below. There was the rain, too, which fell not in drops but in globs — but only for about 180 seconds.

Other than those fans, not one thing was normal about Sunday, right up until the moment Patrick Cantlay claimed his fifth-career PGA Tour win (and second at Muirfield) over Collin Morikawa on the 73rd hole of competition.

“There’s maybe a little hint of something I can’t quite put my finger on,” Cantlay said after his victory.

Um, a little hint of weird?

A weird day at the end of an exceedingly weird week. One that featured a two-day rainstorm, a series of fan ejections for the offense of calling a player by the wrong name, and a stone-cold whiff by the eventual runner-up.

Not even the golf course was as expected. The Muirfield Village redesign yielded a winning score that was four strokes lower than last year, though that was largely helped by soft, soggy conditions over the opening three days. Nicklaus admitted during CBS’s telecast on Saturday that “it’ll take time” for the course to properly grow into its new form.

But nothing about Sunday at the Memorial was weirder than the situation involving Jon Rahm. Never in the history of professional golf has a player been forced to withdraw from a tournament while holding a six-stroke 54-hole lead on account of a positive test sample.  That is a fact that requires no cross-referencing, and it represents elite company Jon Rahm never wished to see himself enter.

Yet there he was, shortly after 6 p.m. ET on Saturday, bent over in a moment of utter astonishment off the 18th green as he realized his miraculous, tournament-record tying effort through the first three rounds would not be given a final-round swan song.

It was fitting, naturally, that Cantlay would snag a victory in a playoff after dueling with two players Rahm was paired with on Saturday (Morikawa and Scottie Scheffler). And fitting still that none of the three, or anyone really, had the appropriate words to contextualize Rahm’s disappointment.

“Such a weird situation and very unfortunate,” Cantlay said. “He played so amazing the first three rounds that the way I felt Sunday morning was obviously a lot different than I felt on, walking off the 18th green on Saturday.”

“My heart just sank,” Scheffler added. “It’s terrible that that happened. I think it’s terrible they told him in front of the cameras. I just, my heart is still, it just sinks for him. I just feel awful.”

“You know, it took me an hour or so to really just digest what had happened,” said Morikawa.  “I was in the locker room and then my girlfriend texted me. I went down stairs to look at the TV and you see what happened to Jon and it’s awful. He deserved to go out and play really well and he was 18-under. The rules are rules and you have to follow guidelines. We knew all the risks going in him not getting vaccinated.”

The fact remains that Rahm would have needed only an average effort to emerge victorious on Sunday at Muirfield Village. Cantlay’s winning score, 13 under, was a full five strokes off Rahm’s tally through the end of the day Saturday. The Spaniard could have shot 76 on Sunday and still won the tournament without a playoff hole.

Had Rahm won, he would have become only the second player ever, after Tiger Woods, to win back-to-back Memorial Tournaments.

Instead, he enters the week ahead with question marks about his ability to properly prepare for the U.S. Open, which begins in only 11 days. Rahm will have two days from the time he leaves CDC-mandated quarantine to the time he tees off at Torrey Pines in pursuit of his first major championship.

Cantlay, for his part, has a win to celebrate. His performance — particularly down the back nine — was certainly deserving of victory. He struck his tee shot to nine feet on No. 16, drained a 25-footer on No. 17, and sunk a 10-footer to clinch the playoff on No. 18 after two miraculous recovery shots.

He leaves Muirfield Village with at lease a couple of Ws. A winner, yes. But also wistful.

“I think I’ll definitely remember it slightly different,” he said. “I don’t wish that kind of scenario on anybody. I would much rather have faced him down today and shot an extremely low round and beat him that way. But unfortunately, there’s nothing I can do.”