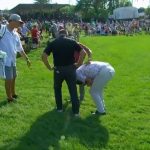 Jon Rahm on Saturday after learning he had tested positive for Covid-19.

DUBLIN, Ohio — This was supposed to be a story about where Jon Rahm was headed.

How he stood on the brink of becoming only the second player ever — next to Tiger Woods — to win back-to-back Memorial Tournaments. How he shot 10 under-par in a rain-extended 23 holes, including an ace on his first go-round at the 16th.  How on his second try at the 16th, he’d turned to caddie Adam Hayes and expressed mild surprise when his ball landed 30 feet from the flagstick. “I thought that was in when I hit it,” he told Hayes. (A few minutes later, he poured in the birdie putt for good measure.)

It was supposed to explain how Rahm had befuddled even the greatest ever, Jack Nicklaus, who watched as the 26-year-old Spaniard dismantled any notion of a tightly contested tournament.

“It is competitive, except for Rahm,” Nicklaus said on CBS’s broadcast shortly after Rahm extended his lead to six.

The news of Rahm’s positive Covid-19 test and subsequent withdrawal bowed him over in shock just after 6 p.m. local time. We know this because we saw it on television. PGA Tour medical officials stopped Rahm just yards from the 18th green and shared with him the test results that had been confirmed just minutes earlier.

We would later learn that Rahm had been tested by the PGA Tour’s contact-tracing program as a result of a close-contact with a fellow positive test. Andy Levinson, a spokesman for the Tour, later explained that Rahm was asymptomatic, but the results of the test were conclusive.

“No, the CDC’s protocol regarding people who are confirmed positive for Covid-19 is clear, and that is 10 days of isolation unless someone is asymptomatic and is able to produce two negative tests of a minimum of 24 hours apart,” Levinson explained. “Unfortunately, the timing would not allow Jon to continue to participate.”

There is the question of Rahm’s vaccination status. The Tour would not comment on his status, but referred to its contract-tracing rules, which stipulate that fully vaccinated players need only receive testing if they become symptomatic. Rahm was asymptomatic at the time of his positive test, which would assume he was not fully vaccinated at the time of his close contact. The Action Network’s Jason Sobel reported that Rahm received a vaccination at the beginning of tournament week, but remains several days removed from the two-week threshold for “full vaccination,” as outlined by the CDC.

“If someone had been fully vaccinated, and fully vaccinated under our protocol is, and it’s defined by the CDC, is 14 days past the full cycle of a vaccination. They do not have to test as a result of being a close contact…unless they develop symptoms,” Levinson said.

There is also the question of his playing partners. Between the latter portion of his second round, and the entirety of his third round, Rahm played with both new co-leaders Patrick Cantlay and Collin Morikawa on Saturday. Cantlay told reporters after his round that he hasn’t yet received a vaccination, but that he did have a prior infection.

According to the Tour, both players are undergoing interviews Saturday evening to determine whether they will also have to enter the contract-tracing program.

“I’ve already had COVID, so, yeah, I got to imagine I have antibodies, so I don’t feel too concerned,” Cantlay said after his round. “Obviously it is somewhat of a concern, but I got to imagine that I had it earlier this year, so I’m feeling pretty okay about it.”

An added gut punch to the situation: the Tour is set to stop testing players for Covid-19 at the end of the month — a decision reached, in part, by rising vaccination numbers among players. On Saturday, the Tour confirmed the number of vaccinated players is now north of 50 percent.

For his part, Rahm was upbeat in a statement released Saturday evening.

“I’m very disappointed in having to withdraw from the Memorial Tournament,” Rahm posted on Twitter. “This is one of those things that happens in life, one of those moments where how we respond to a setback defines us as people. I’m very thankful that my family and I are all OK. I will take all of the necessary precautions to be safe and healthy, and I look forward to returning to the golf course as soon as possible.”

The fallout from Rahm’s positive test means he will be barred from competition until at least June 15th, or two days before the U.S. Open is scheduled to begin – save for today’s result coming back a false-positive, which won’t be known until Monday at the earliest.

It also means he won’t be able to compete on Sunday at the Memorial Tournament, a tournament in which he tied the 54-hole scoring record on Saturday afternoon.

“It’s kind of the worst situation for something like that to happen,” Cantlay said of his playing partner. “He played awesome today and it’s just, it’s really, it’s a shame. It’s unfortunate.”